DE PERE — It’s Wednesday afternoon in the crypt of St. Norbert Abbey. A handful of people have gathered for prayers and devotions dedicated to St. Joseph. It is a scene that has been repeated each week for well over 100 years at St. Norbert Abbey, home to the National Shrine of St. Joseph.

The story of how this site became recognized as a national landmark began in 1888. It was in that year when Fr. Joseph Durin, a Missionary of the Sacred Heart, became pastor of the local parish in De Pere named in honor of St. Joseph.

Fr. Durin’s strong devotion to St. Joseph was widely known. The parish priest quickly sought the approval of Green Bay’s Bishop Frederick Katzer to form an Association of St. Joseph, which would promote devotions to the foster father of Jesus in his parish and around the diocese. Bishop Katzer gave his approval to the association and gave a solemn blessing to the parish’s statue of St. Joseph. It was not long after this when Fr. Durin initiated a perpetual novena to St. Joseph which would be celebrated each Wednesday of the year. 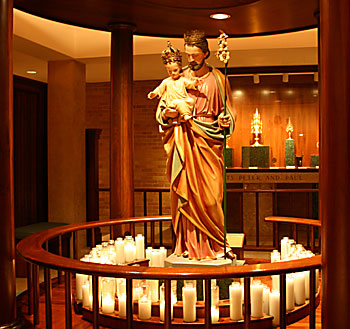 A statue of St. Joseph holding the infant Jesus is the centerpiece of the National Shrine of St. Joseph located at St. Norbert Abbey in De Pere. (Eddie O’Neill | For The Compass)

However, Fr. Durin wasn’t content with just a local devotion to the patron saint of workers. He wanted the Association of St. Joseph to be recognized by the universal Catholic Church and connected to the Archconfraternity of St. Joseph.

According to the Catholic Encyclopedia, a confraternity is a voluntary association of the faithful, established and guided by competent ecclesiastical authority, for the promotion of special works of Christian charity or piety. Thus, an archconfraternity serves as the head or leadership organization of the local confraternities.

With the help of Bishop Katzer, Fr. Durin’s prayers were answered in January of 1892 when Pope Leo XIII declared the Association of St. Joseph in De Pere to be “enriched with the title and privileges of the Archconfraternity for the United States of America.”

Fr. Durin’s next move was to organize a solemn crowning of the statue of St. Joseph. He was encouraged to do so by a number of bishops and archbishops across the nation. Under the guidance of Bishop Sebastian Messmer, who became Green Bay’s fourth bishop in 1892, hundreds of faithful devotees and clergy participated in the crowning ceremony. A flat or mural crown was placed on the head of St. Joseph while an imperial crown adorned the child Jesus who is held in Joseph’s arms.

With the pontifical declaration as the headquarters of the Archconfraternity of St. Joseph and now its solemn crowning, the local shrine became known as the National Shrine of St. Joseph.

One of his well-known expressions was, “Yes, I pray to God directly, to the Lord, and to St. Norbert as my intercessor, but St. Joseph is my choice in time of great need.”

In 1959 the new St. Norbert Abbey was completed on the other side of the Fox River in East De Pere. The headquarters of the archconfraternity, as well as the St. Joseph statue and the weekly devotions, were all moved there. The Norbertine community saw it fitting to place the crowned statue of St. Joseph next to Abbot Pennings, who is buried in an adjacent room all in the abbey’s lower level.

On March 19, the church celebrates the Solemnity of St. Joseph. The Norbertines offer their annual nine-day novena leading up the feast day. According to Fr. James Herring, prior of the abbey, the prayers and devotions draw quite a number of faithful each day.

Fr. Herring added that while the abbey does not keep track of the number of visitors to the shrine, he estimates that there are several hundreds of people who are regular visitors.

“Each week I get e-mails or letters from people who are interested or want to learn more about the Archconfraternity of St. Joseph and joining it as well people who want to know more about the shrine,” explained Fr. Herring.

One of the regulars at the shrine is Robert Weller. He has been a faithful attendee at the weekly novena to St. Joseph for the past nine years or so. The devotion, which includes exposition and benediction of the Blessed Sacrament as well as the Litany of St. Joseph, is one thing that keeps the St. Therese parishioner from Appleton going.

“I have a lot of devotion to St. Joseph,” noted Weller.

He is often joined by Arlene Molzahn, a member of St. Agnes Parish on Green Bay’s west side. She credits the peaceful, prayerful setting of the shrine as one incentive that keeps her coming back.

Like Weller, Abbot Pennings and the thousands of people who have visited the national shrine over the past 120 years, Molzahn says there is something special about St. Joseph.

“Over the years, many prayers have been answered from here. I give credit to St. Joseph.”