The March 13 service, called the Rite of Election and Call to Continuing Conversion, brought catechumens (those not baptized in any Christian faith) and candidates (those baptized but who have not received other Catholic sacraments), representing 51 parishes, together. 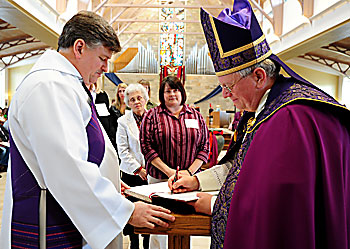 People from around northeastern Wisconsin, who seek to enter the Catholic Church at Easter, gathered for the Rite of Election and Call to Continuing Conversion March 13 at Our Lady of Lourdes Church in De Pere. About 230 people catechumens and candidates were presented by their parishes to Bishop David Ricken as they begin their final period of preparation for the sacraments of initiation. Pictured with Bishop Ricken is Deacon Michael Eash from St. Bernard Parish in Appleton. (Sam Lucero | The Compass)

Joined by their sponsors, the group publicly announced their desire to receive the sacraments of initiation at the Easter Vigil on April 23. This year marked the 25th annual Rite of Election, which is traditionally held on the first Sunday of Lent.

The service began with a procession of parish representatives into the church. Each carried a Book of the Elect with signatures of the men and women who had declared their intention to receive the sacraments of initiation.

Bishop David Ricken welcomed the catechumens and candidates, thanking them for their desire to grow closer to Christ through the sacraments.

“This is the once-a-year gathering when the bishop gets to officially choose you to enter more deeply into the sacramental mysteries as you prepare yourselves during the season of Lent,” he told them.

In his homily, Bishop Ricken told the assembly that the catechumens and candidates provided living examples of what it means to journey through Lent.

“Each of you who are entering into this baptismal calling and into the fullness of the sacraments of initiation, you are an occasion for us to enter more deeply into a Lenten renewal of our own,” he said. “We thank you for saying yes to this call and we ask you to continue to be an example for us as we strive to be an example for you.”

Lent is traditionally a time for fasting, prayer and almsgiving, said Bishop Ricken. But it’s also a time to rid oneself of addictions. 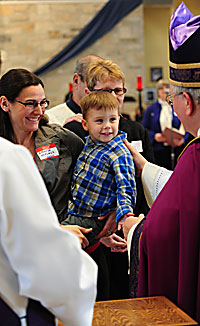 Bishop David Ricken greets Amanda Kraemer and her son Jack, 3, members of Ss. Peter and Paul Parish in Kiel, during the Rite of Election and Call to Continuing Conversion March 13 at Our Lady of Lourdes Church in De Pere. Kraemer’s husband, Barry, was one of about 230 candidates and catechumens attending the event. (Sam Lucero | The Compass)

“This is a time for all of us to begin to wean ourselves off of addictions that are distracting,” he said. “Even good things like television and the Internet. So for today we ask for that grace for the whole church, that we may truly walk in the spirit of freedom by dying to the things that are not of Christ and by living for Christ and Christ alone.”

“Two of the three women who are catechumens are married to Hispanics who are practicing Catholics,” she said.

The large contingent of Hispanics reflects statistics released by the U.S. Census Bureau March 10, which showed that Wisconsin’s Hispanic population grew by 74 percent from 2000 to 2010. Hispanics now account for 5.9 percent of the state’s population.

Sr. Melanie explained that Hispanics preparing for the sacraments of initiation are typically baptized Catholics. “For many of them, because moving is a variable of their life, many times they are not able to receive the sacraments,” she said. “As adults or teens, they come forward and say, ‘I’ve never had the chance to receive Communion or be confirmed, so I would like to do that now.'”

She also credited the parish’s “strong team of catechists” who welcome and prepare the candidates and catechumens.

During his homily, Bishop Ricken recited in Spanish part of the day’s second Scripture reading from Ephesians, which noted that through Jesus, everyone “has access in one spirit to the Father. This means that you are strangers and aliens no longer.”

He said these words offered encouragement to the Hispanic community.

“In English this means that you are fellow citizens of the saints and members of the house of God,” he said. “For some of you who are here in the first generation of your family coming to this country, it is very strange to go into a foreign country. I know. I’ve lived in two of them. It’s not easy getting used to their customs, their languages, their way of understanding and thinking. You have one blessed consolation: that you are citizens of the church and citizens of the household of God and what a consolation that is for all of us.”

Following the homily, catechumens were invited forward with their sponsors. After expressing their desire to receive the sacraments of baptism, confirmation and Eucharist, the catechumens then shook hands with the bishop.

“Catechumens, I now declare you members of the elect, to be initiated into the sacred mysteries at the Easter Vigil,” he told them.

Candidates were then presented to the bishop, coming forward to shake his hand. “I now officially accept you as candidates preparing for full participation in the sacramental life of the church,” Bishop Ricken told them.

The service closed with a prayer over the elect and candidates.