Hannah was diagnosed with a brain tumor in September of 2010 after experiencing flu-like symptoms for an extended period of time. The tumor was successfully removed at UW Hospital in Madison, but pathology on the removed tumor revealed medullablastoma, the most common, fastest growing malignant brain tumor in children. In October, the Sherwoods traveled to Boston for an advanced radiation therapy procedure at Massachusetts General Hospital. Hannah was in Boston for chemotherapy and treatment from Oct. 20 through Dec. 8. On Jan. 16, she began another 10 months of chemotherapy. 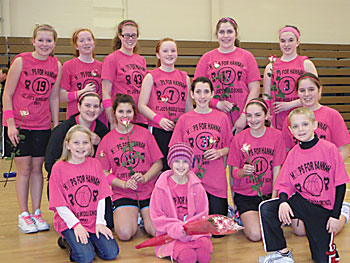 The sixth, seventh and eighth grade girls’ teams from St. Joseph were all in action Feb. 12 as a part of “Hoops for Hannah,” a benefit event in support of Hannah’s fight against cancer. Pink, Hannah’s favorite color, was on display on the court.

“The girls never mind wearing pink,” said Geenen. “All five (St. Joseph teams) wore pink shirts. Some wore pink headbands, wristbands and shoe laces. Our team was motivated and wanted to play well. They saw that this game was an avenue to help someone.”

Geenen has known the Sherwood family for a couple years. Mona brought Hannah to a practice so she could meet the team prior to the benefit game. The players collected pledges, per team point, and flat donations.

“If you give middle schoolers an opportunity, they can surprise you,” said Geenen. “I think it’s important to tap into their gifts and help them realize that they can help others.”

Money was also raised through a raffle at the event, and the referees donated their time.

Hannah has also received financial support from the St. Margaret Mary School community, including a bake sale by the second grade Brownie troop that raised $2,500. “Pray for Hannah” bracelets were sold and a December benefit concert raised approximately $7,000.

“We are very anxious to have her back at school,” said Eleanor Healy, principal at St. Margaret Mary. “She was here on Valentine’s Day.

“(Hannah) is a typical second grader,” she added. “She is anxious to get back into soccer and play with her friends.”

Scott, Hannah’s father, shared with Geenen that the day of the basketball games was one of the best for his daughter since she began treatment.

“She did so well,” said Geenen. “She was running around. Our kids did well. They helped raise awareness and some money. The games were fun.”

Donations in support of Hannah and her family are being handled through Community Benefit Tree — Hannah Sherwood, www.communitybenefittree.org.