“She knew what she believed and had a strong faith,” he said. 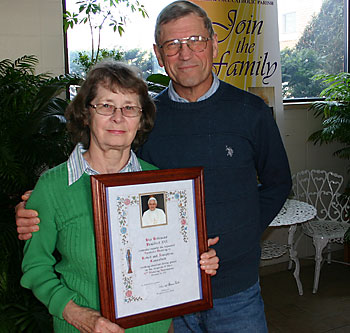 Bob and Josie Kazenbach (Eddie O’Neill | For The Compass)

After their wedding, the two moved to Door County and ran a cheese co-op for several years before they returned to Green Bay. Bob took a job at the Marketing Association, which helped support a number of smaller cheese makers in the area. The Kazenbachs raised two boys at Holy Martyrs (now Prince of Peace) Parish, on the far eastside of Green Bay. They have fond memories of teaching high school religion, being involved in Boy Scouts and starting up the parish’s pro-life group.

Bob noted that it was in the early 1970s when his faith life changed thanks in part to a local Cursillo weekend.

“I just had a real conversion experience on my Cursillo weekend,” Bob told the Compass. “I became excited about my Catholic faith. Before that I just went to church on Sunday because that is what you do. On that weekend, however, my Catholic faith came alive.”

As their two boys, Mike and Kirk, moved into their teen years the couple was heavily involved in Teens Encounter Christ (TEC) retreat weekends.

“We’ve been involved in TEC since it first came to Green Bay in the late 1970s,” Josie said.

They are very grateful that their two sons remain Catholic. Bob said that there was no magic pill to this but he can pinpoint a few things that have helped.

“As a family we always did some traveling each summer. We would go the national parks and camping. It was good family time,” Bob explained.

When their boys were younger, the family always read the Bible right after dinner.

In 2004, the Kazenbachs moved out of Holy Martyrs and joined Ss. Peter and Paul Parish near the downtown Green Bay area. They say they feel right at home there with the parish’s adoration chapel where they can be found together praying each Sunday morning.

In November of 2010 the couple marked their 50th anniversary with a special Mass at Ss. Peter and Paul. They were joined by a large crowd of family and friends. The day included an entertainment program at a reception after the Mass which was put on by the Kazenbachs’ 14 grandchildren.

“We were flattered,” Bob said. “The kids did a great job.”

They were touched by a large framed blessing from the Vatican which hangs in a prominent spot in the family home. The special blessing on the occasion of their golden anniversary was a gift from their sons.

Just as there is no magic pill or formula to keeping children active in the faith, the Kazenbachs say that marriage, whether it’s one year or 50 years, takes work.

“Ever since our Cursillo, we have prayed each morning and evening together,” said Bob. “The major part of our happiness has been growing together spiritually. I think equally important is having an enthusiasm for the faith. I know as a convert, I am excited about being a Catholic.”