The laughter subsided quickly as the group began exploring a sobering topic that affects every family in some way. The three-day conference featured nationally recognized experts in the fields of substance abuse and outreach ministry.

The opening day focused on alcohol addiction, and Fr. Paul Demuth, a member of the TEAM Days planning committee and pastor of St. Elizabeth Ann Seton Parish, described how this problem is especially critical to the local church. 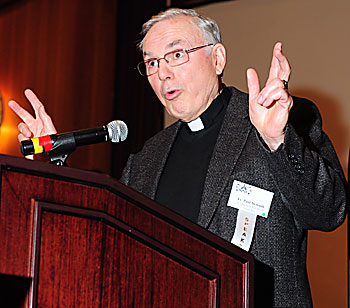 Fr. Paul Demuth, pastor of St. Elizabeth Ann Seton Parish in Green Bay, challenged TEAM Days attendees to help address the problem of alcohol addiction that is prevalent in Wisconsin. “It’s got to change and we’re going to help,” he said. (Sam Lucero | The Compass)

“In Wisconsin, there is one tavern or club for every 372 citizens. The national average is one for every 1,400,” he said, adding that Wisconsin has the reputation for leading the nation in drinking among adults and underage drinking.

Fr. Demuth discussed his work with the Bay Area Community Council, a Brown County citizens’ think tank, which formed a task force in 2007 to study the effects of alcohol abuse in the community. The group released a study in 2010 which stated, “Brown County has a drinking problem.” The task force proposed 10 ways county leaders and agencies could address the problem.

“There are 70 percent of us in this community that either don’t drink or drink moderately. Could you imagine the powerhouse in this community if the 70 percent of us say, ‘It’s got to change and we’re going to help,'” said Fr. Demuth. He issued a challenge to the parish ministers: “I dare you. I dare me. Let’s see if we can deal with our own addictions and name them. Let’s figure out how Brown County, the Diocese of Green Bay and the state of Wisconsin doesn’t have to have the nicknames it has.”

Keynote speaker Sis Wenger, president and chief executive officer of the National Association for Children of Alcoholics, told parish ministers that churches are the first place families seeking help with addictions turn, but most pastors and parish ministers aren’t equipped to help and don’t know how to intervene.

“Fifteen percent of people (affected by drinking problems) go to the pastor first, but in the past we’ve told them, don’t rock the boat,” she said. “The faith community is the bridge from hopelessness and pain and confusion and fear to the help that’s available in your community.”

Wenger said pastors and pastoral ministers do not have to do counseling work, but they can direct people to community programs. She suggested they learn about those resources. “Make it a point to visit them so they are a personal connection for you, so when someone comes to you, you can direct them” to the proper resources. 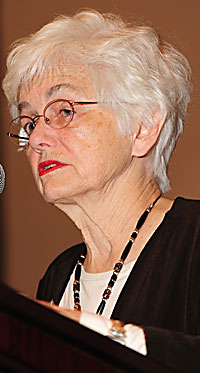 Wenger also discussed the impact of alcohol abuse on children. She showed a video featuring children raised in families with alcohol abuse. The video stated that 11 million children grow up in an alcoholic family and only 5 percent of children of alcoholics get help.

“These children live in your neighborhoods. They come to church. If they are in your parishes, they have no clue that people understand. They need to hear messages from others that it’s not their fault,” she said.

Wenger noted that broaching the subject is not easy in the church. She suggested that parishes could include the topic at Mass during the prayer of the faithful. One example would be on Mother’s Day. She recited a prayer example: “Pray for the moms in the congregation who are trapped in the disease of alcoholism, that help can come to those mothers.”

In an interview with The Compass, Wenger said she has been speaking to church groups for more than 25 years. “I figured out a long time ago that the parish priest and pastoral ministers are really the people who can make an enormous difference,” she said. “For every person who is an alcohol or drug abuser in a parish, there are four to six other people suffering terribly because of it. Many of them leave the church as they go through their adulthood because the church wasn’t there for them in their greatest pain. They grow up thinking, ‘The priest knew this but he doesn’t say anything.'”

When she talks to church groups, Wenger said they are surprised “at the little things they can do that can make a huge difference.”

“And when they realize that they feel empowered. Pastors are so busy, they can’t go back to school and learn counseling, but they can change the atmosphere in the parish to make it inviting,” she explained. “Putting out the pamphlets, hanging up posters. That’s part of sending the invitation. That makes all of the difference in the world.”

Getting involved in the lives of people suffering from addictions is critical to the life of the church, noted Wenger.

“From the perspective of the faith community, I would think they would really want to do something about this because we know that alcoholism or any other drug addiction actually blocks spiritual growth. And not just in the addict,” she said. “In order to survive in that family they have to go along, and in that process they lose their spiritual connection. There is a lot of religiosity to cover it up, they pretend everything is OK, but it isn’t really.”

Message to people in pews

Her message to people in the pews suffering with an addiction: “Don’t do nothing is the most important thing. Don’t enable, which means don’t cover it up. Tell the truth. Ask for help.”

If a parish does not offer help, she suggested going to Al-Anon, Alcoholics Anonymous or a treatment program. Start by going online, she said. “There are Web sites for people who don’t know what to do and would like to do a family intervention. Intervention is not a bad thing to do. It saves lives and saves families. The worst thing we can do is keep it a secret. The worst thing a child can do is keep what goes on in his family a secret. If there’s a neighbor they could talk to or a grandmother, they should never stop asking for help until they get it. Don’t stop.”

Tony Pichler, diocesan lay ministry formation director and TEAM Days coordinator, said he hoped that this year’s topic of addiction would make parish leaders aware of the magnitude of addictions in their lives.