But what Mike is most proud of is the ministry behind the music. He’s performed at dozens of retreats, parishes, faith formation classes and other such events across the country over the past few years. 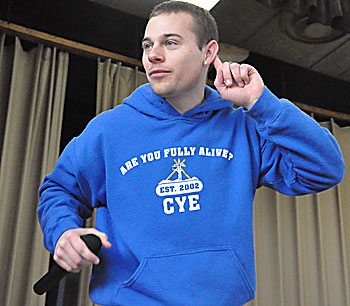 Last year he spent the summer on staff at Catholic Youth Expeditions, where he met his now manager, booking agent and guest artist Corrie Christiaansen. In the fall of 2010 he performed at the diocesan sponsored pro-life “Break Away” event at St. Norbert College.

Bostone is on a mission to spread the Gospel to all who will listen. And he uses a most unexpected method to do so.

“A lot of secular rappers and even artists of other genres lyrically convey messages and promote a way of life that will ultimately lead to death: violence, greed, power, sex outside of marriage, drugs, lust…” Bostone says. “I’m offering listeners rap/hip hop music that glorifies God and will lead them towards Christ.”

He not only infuses his music with the theme of God’s grace, but takes advantage of his time on stage to talk about his own personal conversion story.

Born in Texas in 1988, Bostone moved to Clearwater, Fla., where he spent his adolescent years getting in with the wrong crowd.

“I was always searching for happiness,” Bostone says. “I was seeking to be satisfied … in all the wrong places. I tried finding pleasure in the things of this world — drugs, alcohol, clothes, money, girls.

“I had a heart of selfishness and greed,” he remembers. “And although these things satisfied me temporarily I was always left wanting more. I was never fully content, my joy was incomplete.”

When Bostone hit rock bottom and ended up in the hospital, he realized he needed to change his life.

“It was not until I turned from the sinful pleasures of this world … and came to know Christ as my treasure, that I experienced true joy and peace,” he recalls. “I realized there is nothing on this earth that compares to the pleasures of knowing Christ as my Savior, having a personal relationship with God.”

Bostone found in music a means to express his faith, and began recording songs in his bedroom studio. He relocated to Wisconsin two years ago to pursue a degree in Web design and development. But he still remains committed to his music, which he firmly believes is part of God’s plan for him:

please use me as a tool, the stage and set,

I spit the truth, its all for you so

you can reach and move

in the hearts and minds of

these young people there listening

so I grind with no exceptions — (Lyrics from “Flyin'”)

In May 2011, Lil’ Mike will be releasing a new 18-track album called “Music of Life 2,” along with his first ever music video for the single “Can’t Back Down,” which was completed in February and can already be found on YouTube as well as his Web site, www.mikespot.net.

This summer, Lil’ Mike will again be performing at Lifest, as well as other venues in Wisconsin and Florida. And he’s already started writing lyrics for his next project, a 12-song album to be released in January 2012.

It is not the thought of fame or fortune that drives Lil’ Mike. For him, the real goal is simple.

“If even one life has been touched, one soul led to Christ through this ministry, it has all been worth it,” he says. “As for the future of this ministry, only the Lord knows. Whatever God’s will is that’s what we want to do.”