On March 4, Schutte spoke and performed music for some 200 people at St. Bernard Church. The event was sponsored by the Appleton City-Wide Catholic Adult Education Committee. Audience members sang along while Schutte performed a dozen of his songs, showing off not only his vocal strength but his piano and guitar skills as well. 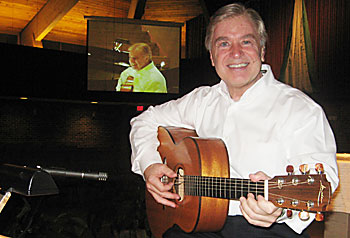 Dan Schutte, a liturgical music writer, singer and performer, sang and spoke in Appleton March 4 and 5. Schutte is a native of Neenah. (Amanda Lauer | For The Compass)

Schutte conducted a Lenten morning of reflection on Saturday, March 5, centered on his book, “Walking the Sacred Path.” He talked about the different images of God that people hold, and how each person can make everything they do in their life a prayer. “We need to find a way to pray always,” he noted. The group was led through a meditation exercise.

The topic of the new English translation of the Roman Missal was also discussed. The Roman Missal is the book of prayers used in worship in the Latin-rite church

The process of changing the missal to what Schutte said is a more literal, word-for-word translation of the Bible has taken quite a few years. Schutte and his publisher, OCP, started getting the preliminary versions of the text three years ago at which point Schutte and other composers began the work of writing new music for the new texts. The new missals will be used starting this Advent.

“After my graduation I entered the Jesuit seminary training program,” said Schutte. “The Jesuit training is not just getting a college degree, the training goes approximately a dozen years during which you study and you work at various Jesuit institutes.”

When Schutte started his Jesuit training, he had some classmates who loved music as much as he did. “It was the years after the Second Vatican Council and we started writing music for liturgy together,” recalled Schutte.

He had his first piece of music published 40 years ago and since that time has added more than 120 liturgical pieces to his collection, ranging from hymns to Mass responses and acclamations. He has two albums with anthologies of his works — “Here I am, Lord” and “Table of Plenty.” Many of his songs have been published in Presbyterian, Methodist and Lutheran hymnals.