‘Movies with a Message’ is Lenten focus

“Movies with a Message” was introduced at the parish five years ago. Perrault and Sacred Heart Fr. Guy Blair, former pastor at St. John, picked the selections. This year, the task was turned over to Fr. Girotti, who chose six films based on the seven deadly sins. Movies are shown at 2 p.m. each Sunday during Lent in the parish social hall and free popcorn and soda are served. Discussion follows, based on a study guide prepared by Fr. Girotti. 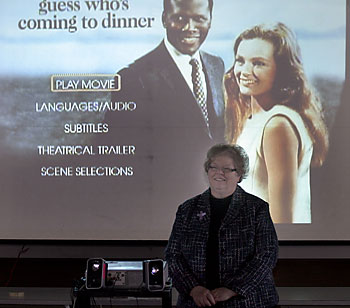 Susan Perrault, director of faith formation at St. John the Evangelist Parish in Green Bay, introduces the movie, “Guess Who’s Coming to Dinner,” during the parish’s “Movies with a Message” Lenten film festival on March 27. (Rick Evans | For The Compass)

“The films correspond to certain virtues or certain vices powerfully, palpably depicted,” said Fr. Girotti. “It’s a great way to learn about our Catholic faith. I write the study guides off the cuff. It’s been on my heart for years and years to do this. Coming to St. John’s, where they had something in place, which Sue had started, was just great.”

The opening film, shown on March 13, was “The Bridge on the River Kwai,” which depicts pride, said Fr. Girotti.

“Some say it’s the finest film ever made,” he said. “It’s definitely in the top five.”

“The Children’s Hour,” which explores the effects of gossip, followed the second week. “Guess Who’s Coming to Dinner” was shown this past Sunday.

“‘Guess Who’s Coming to Dinner ‘is about prejudice, but not just prejudice white versus black,” said Fr. Girotti, “but black versus white, young versus old, old versus young, so it’s very well-rounded in that way.”

The April 3 film, “A Man for All Seasons,” has special personal meaning, he added.

“The theme will be conscience and how St. Thomas More stood up for conscience and lost his life for it,” he said. “My call to priesthood came from watching that movie on confirmation retreat in 1992. I’m particularly fond of that film.”

The final two films in the series are “Twelve Angry Men” (April 10) about justice and standing up for what is right, and “To Kill a Mockingbird” (April 17), which Fr. Girotti said deals with both racism and justice.

While Fr. Girotti believes in the merits of the films in this year’s series, he does offer criticism where he sees fit. He was not impressed with the work of Katharine Houghton, Katharine Hepburn’s niece, who plays her daughter in “Guess Who’s Coming to Dinner.”

The context, the time the film was made and some background about the actors are important when looking at the films as works of art, added Fr. Girotti. For example, Sir Alec Guinness of “The Bridge on the River Kwai” had become a Catholic a few weeks before filming started, “so he has a very interesting conversion story.”

“You couldn’t depict certain things, overt sexuality, language, things like that,” he said. “The Hays Code was heavily influenced by the Catholic Church. It forced films to depict things in an artful way between the lines, the use of black and white, light and dark. Today, they would just show everything, but something is lost.”

Fr. Girotti already has films in mind for next year including “High Noon,” “On the Waterfront,” Psycho,” “Marty” and “A Place in the Sun.”

“‘Psycho’ is a very moral film,” said Fr. Girotti. “People just get caught up in the shower scene, but it is the best depiction of conscience.

“‘High Noon’ is a western, but it’s basically about courage,” he added. “Gary Cooper had converted to Catholicism. It was one of his last films. What is also interesting about ‘High Noon’ is it’s set in real time.”

Perrault said that she appreciates Fr. Girotti’s openness with the movie program.

“He shares a little bit more of himself through his insight,” she said. “The people are fascinated this year with the classics because he’s not from that generation, yet he knows so much about them. It’s fun when someone has so much enthusiasm for something and he can bring that faith dimension to it.”

“Lent is a reflective time. It’s usually a time where the weather is not so good, so you can stay inside and watch a two-hour movie,” said Fr. Girotti, who credits his father for his passion for film. “It’s a time where we think about virtues and vices. The enjoyment for me is to see the eternal truths of our faith, the eternal truths that are reflected in natural law that is truth and justice, right and wrong, and respect for others and love. These movies reflect that.”

The film showings are open to the public. For those who cannot attend, but wish to explore these movies with a group or on their own, the study guides from St. John the Evangelist are available. Contact Perrault at [email protected] for copies.

“‘Movies with a Message’ has always been a well-received adult education program,” said Perrault. “It helps people make the connections between their everyday life and popular culture. What can we glean out of there and make these touch points with our faith? If these people had viewed their situations through the eyes of faith, what may have they done differently?”