According to the Goodness Reigns Web site, their mission is “to ignite the imagination of youth and young adults through the art of filmmaking and other technologies so as to better form ourselves as Catholics and inform others of the truths of our humanity and our connection to Jesus Christ.” 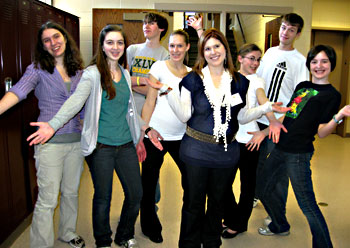 Holy Spirit youth minister Sarah Elmer talked about the contest and how her students became involved. “We’ve been entering the “Outside the Box” national Catholic film competition for the last four years. This year it’s called the “Goodness Reigns” competition. Previously there were no prizes attached to it but our films were released nationwide and internationally which was really great because that was a really nice way for our peer leaders to evangelize,” said Sarah.

“This year, prizes are involved so we got really excited,” she added. “We started talking about it a year ago. In the summer we got together for a couple of brainstorming sessions — how to make a video, we had a professional teach us the specifics of film making, then we made our script together.”

The Chazoo Warriors chose to center their film on missionary spirit. Several of the team members, all Kimberly High School students, discussed their experiences making this film, which focused on modern-day high schoolers and how they’ve lost touch with what is really important in life because of distractions such as cell phones, boy/girl relationships and computers.

Abby Schreiber, 16, a sophomore, had a key role in bringing this project to life. “I helped in planning the main theme of the script and then basically wrote the script — but we added things and edited things — and I somehow ended up with the main part.”

The assistant director was Lexie Felton, 16, a junior. “There was a lot of planning. There were 20 students involved. They were easy to work with. It was really fun but it was a lot of work. It took seven or eight hours to film.”

Lucas Mader, a 16-year-old sophomore, was on screen but was “just a background person.” He said they all chipped in giving ideas to the writers to make it better. One of the biggest challenges during filming was keeping a straight face. “There were two hours of outtakes,” he admitted.

One role that was instrumental to the film was the voice of God, provided by sophomore Aaron Mader, 15. “I wasn’t able to be part of the filming of the video, but this was a way to be involved. I’m pretty proud of the whole project,” he said.

“I hope that people can see this movie and really be changed by it and be able to relate and say, ‘Oh, I have some things I need to change in my life’ because it talks a lot about cell phone usage and things that are distracting you from God,” said Abby. “I hope by watching this video that people will focus more fully on God.”

Making this movie impacted all the students involved. “I think it definitely brought to mind that things like phones, they really do take a lot of time out of your life that you could use for praying or thinking about God and doing things that are for God,” said Aaron.

“It was awesome how this brought us together when we were planning it and doing it,” said Lexie.

As youth minister, Sarah had her own perspective. “My favorite part … is being really proud of seeing the group and how they’re actually taking leadership in their faith which is really hard to do in these times. It gets looked down upon sometimes from their peers. That takes a lot of courage and they’re doing it on an international basis. I think it’s really neat that they get out there and evangelize.”