The seminar served as a follow-up to Pope Benedict XVI’s encyclical “Caritas in Vertate” (2009), which explores the problems of global development and progress toward the common good. Grassl has published two papers and given several presentations on various aspects of the pope’s third encyclical. 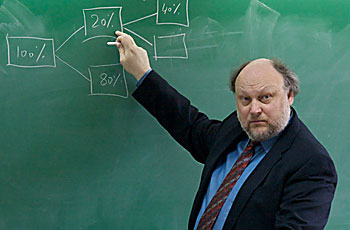 “Encyclicals are nice, but they don’t do much,” said Grassl. “They have a certain normative power. How can businesses make use of it? How does it relate to management and strategic planning decisions?

“The Pontifical Council is considering developing a document that is a lot shorter than the encyclical and much easier to read,” he continued. “The encyclical will not be read by the average Catholic. This will be something of a summary. The encyclical also talks about the issues of peace, abortion and all kinds of social topics in a broad sense. This will be a summary of what it means to running and managing a business.”

A group from the University of St. Thomas in the Twin Cities planted the idea for a seminar with the Pontifical Council. Grassl, who has done extensive research on Catholic social thought in business, has participated in other conferences and workshops organized by St. Thomas. At the Vatican, he presented “Hybrid Forms of Business: The Logic Gift in the Commercial World.” The talk addressed the call for business entities to bridge the traditional divides between the for-profit and non-profit sectors and between the private and public sectors.

“A lot of the ideas the pope wants to push with the encyclical is to inject the logic blurring the traditional boundaries,” said Grassl. “There are many institutions out there nowadays that often have a not-for-profit purpose, but are managed completely like a profit enterprise. If you look at Catholic Charities, for example, they are professionally managed. The American Red Cross is another example.”

The seminar, Feb. 24-26, featured business persons and researchers from around the world and Pontifical Council members, including Cardinal Turkson, Bishop Mario Toso of Italy and Msgr. Anthony Frontiero of New Hampshire.

When exploring ethical business issues, most stem from one basic problem, he said, “not being true to the purpose of business.” This results in the mushrooming of the financial sector to the detriment of the productive sector and the economy.

“That’s clearly a mistaken view of what business is here to do,” he said. “Business is here to do projects, to create goods and services that make life better and have meaning to people. We have veered from that, not only in the United States, but in other countries as well. … The purpose of finance is facilitating consumption and facilitating investment. It’s not the purpose of finance to create more money through transactions within the financial sector.”

Grassl explained that business scandals such as Enron do not apply to Catholic social thought because they involve legal issues. Ethical questions arise when the alternatives that businesses have to choose from are all legal, but some choices are better than others.

“If something is illegal, it’s not a question of ethics,” said Grassl. “Enron was so blatantly illegal.”

In addition to his presentation, Grassl distributed a paper he wrote on “Caritas in Veritate” at the seminar. The paper from which his talk originated is expected to be published online and in an academic journal. He was also able to invite Kourtney King, a St. Norbert student studying in Rome, to attend one of the sessions.

“She has taken a couple of my classes,” he said. “During a coffee break, she spoke with Cardinal Turkson. He interviewed her about St. Norbert College for about 15 minutes.”

“Once again, not Enron, that’s too easy, that’s criminal,” said Grassl. “In accounting one often has certain latitude to the value of assets. In auditing, accountants have certain discretion. What are the principles they go by? What would it mean to think in a Catholic way? What would it mean to prioritize people before non-human assets? In accounting, one often has to make such decisions. Very little literature exists in this area.”

Grassl said he looks forward to seeing the document released from the Vatican. The seminar was conducted in Italian, but the document, which does not need the pope’s approval, will be released in English.

“I hope it comes out,” he said. “Some things never see the light of day. I was asked to make myself available for further consultation if they have a draft and need input. Cardinal Turkson and Bishop Torso listened in for two-and-a-half days. They really observed all of the discussion and took notes. That should set the stage for this document, which should be readily accessible.”