The concept is called a “learning landscape,” and it promises to merge the school community with the larger community. It will be open to all children regardless of the school they attend. 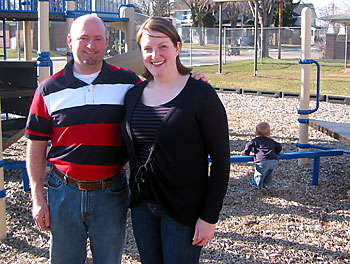 Susan and Matt Hurteau (Tom Kelly | For The Compass)

“There has been a tremendous amount of buy-in,” Susan explained. “This is not just a ‘my kid’s’ school. The school property is owned by St. Mary Parish, and it’s located in a neighborhood that’s not all Catholic.”

Inspiration for the project began with Catholic Central’s recruitment initiative as the school searched for ways to strengthen its appeal. Enrollment was down and Catholic Central was slotted first in the ACES/Xavier Educational System for closure at the time.

When judging the school only by its exterior appearance, said Matt, the drab chain-link fence that encloses the space on three sides, the lack of green space, the flatness of the entire area and even the chain nets on the basketball hoops have all contributed to negative quality perceptions.

Susan added that the goal is to maximize the footprint and the appeal of the “pocket park,” another term for the concept. In addition to 50 percent more green space than before, the learning landscape will feature a rain garden, a new tree, outdoor classroom seating areas and a shade structure. The chain-link fencing will be replaced by a stone fence with brick-and-wrought-iron-arched entries, historically aligned with the architecture of the Old Third Ward.

In addition, a substantial berm, a gentle mound of earth, will eliminate the stark flatness of the space. Substantial portions of the parking area will double as a large-scale map of the United States, as well as a map depicting the Fox River, its locks and the Old Third Ward neighborhood. “It conveys how our city is in the heart of the Fox Valley, how our school is in the heart of the city and how we are the oldest Catholic school in the city,” Susan explained.

Matt, owner of Polar Bear Carpentry, has volunteered his own skills and talents to support the project. He also worked with the city where permitting, utilities and signage for the learning landscape are concerned.

The Hurteaus emphasize the many and varied skill sets that have come together — including Pat Del Ponte, an architect with Hoffman Corporation and member of St. Mary Parish. “He donated his time and talent in developing the conceptual vision for the landscape,” Susan noted.

She said the rendering was vital in gaining support from the City of Appleton, St. Mary Parish, Catholic Central Elementary School, Catholic Central Home and School, homeowners throughout, the Old Third Ward Neighborhood Association, area businesses such as Fox River House and Atlas Coffee Mill, and other benefactors.

Ann Higgins, a member of St. Mary Parish and former board member with Appleton Downtown Inc., volunteered her fund-raising skills. Working with Susan to draft a community development block grant proposal, which, complemented by Del Ponte’s conceptual rendering, it resulted in a $10,000 grant from the City of Appleton.

Another meaningful example: the city donated a one-foot-wide strip of land along the entire length of the project for aesthetic planting. Matt compares its value to the celebrated “Marigold Mile” that brightens South Oneida Street every year. “We’ll gratefully accept every inch of green space we can get,” he said.

Matt and Susan have three young children — Grace, 6; Sam, 4; and John, 1. Grace and Sam are enrolled at Catholic Central, the same school Susan attended as a child. In fact, the Hurteaus live in the same Historic Old Third Ward home where Susan’s parents raised their own family of 12 children as members of St. Joseph Parish.

Matt says the project effectively dovetails with the wave of recent neighborhood improvement projects — including the overhauling of the College Avenue/downtown area as well as Richmond Street, which runs right past the school.

“The community will see the space begin to transform immediately as the summer break arrives,” Matt said. “Be on the lookout.”

“This is a great example of public and private partnerships, with everyone winning,” Susan said. “It’s also a faithful example of stewardship that reaches beyond the boundaries of the Catholic Church.”