Err on the side of caution with concussions

“There are incentives for players not to be entirely honest. If you are a starting player and you are out four or five weeks, you’re giving an opportunity to another player to take your spot,” he said. “There’s huge amount of pressure to play. Players play all the time with minor strains, sprains and bruises, but the NFL and other pro sports are putting the brakes on head injuries and are going to be as objective as they can.” 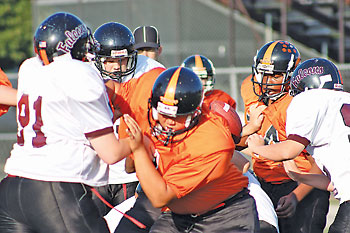 More precautions are being taken at all levels — pro, college, high school and youth sports — to ensure safety when head injuries occur. (Photo courtesy of St. Joseph football program | For The Compass)

The changes at the professional level are slowly working their way down to the collegiate, high school and even the youth level, added Dr. Johnson, who has been practicing emergency medicine for 24 years. When a patient arrives at the emergency room with a possible concussion, there is not a great deal that medical professionals can do other than diagnose it and provide instructions, he said. It’s important that people understand the injury to understand the course of action by physicians.

“A concussion is when you take a blow to the head and it causes some shaking of the brain so to speak and that causes some dysfunction in the way the brain works,” said Dr. Johnson. “It’s not a dysfunction that we can see structurally. If you were to take someone’s brain out and look at it physically right after a concussion, it would look normal.”

When Dr. Johnson first started practicing medicine, CT (computerized axial tomography) scans and MRIs (magnetic resonance imaging) were rare for concussed patients. As CT scans became more plentiful, affordable and faster, “we began giving CTs of the head to everybody,” he said. Now, due to concerns about the risks of radiation, CT scans are ordered judiciously.

“We’ve learned a lot of information that allows us to predict who would have an abnormal CT or not,” said Dr. Johnson. “If someone has a head injury and they don’t pass out for more than five minutes, they don’t have an abnormal mental status exam; if they have a normal neurological exam and haven’t thrown up more than once, the likelihood that something would show up on a CT scan that would require a medical intervention is essentially zero.”

Most concussions heal without any treatment. The concern, which has led to more thorough testing in recent years, is the long term effects.

“More significantly, what is the effect of multiple concussions if the brain hasn’t healed from an existing one? That’s where a lot of the focus in sports is right now,” said Dr. Johnson. “I’m very careful to tell patients that they should not be engaging in high-risk activities that will put them at risk for another concussion until all of the symptoms of that first injury are completely gone.”

Symptoms that may follow a concussion include short-term memory loss, headaches, difficulty sleeping and subtle signs such as difficulty concentrating and difficulty with math and spatial skills. Athletes need to be kept out of competition until the concussion has healed because a second head injury can cause the brain to swell, leading to more significant damage, said Dr. Johnson.

Some misconceptions remain about diagnosing and treating concussions, he added. Many people look at the pupils of the eyes after a blow to the head, which is not an indicator of a concussion.

“There may be a spasm in the eye because the person got hit in that area,” said Dr. Johnson. “If the pupils are enlarged, that’s a late finding. There are a lot of other things going on.”

Many people also believe that someone diagnosed with a concussion needs to be kept awake. Keeping someone awake doesn’t prevent swelling in the brain, said Dr. Johnson. If caring for someone with a concussion, you may want to wake the person up every few hours to monitor symptoms, but you do not need to keep the person awake.

In the past, there was also the thought that narcotics shouldn’t be given to someone with a head injury. According to Dr. Johnson, it was centered on the idea that you could mask problems. Pain medications do not cause further brain damage.

“When a person has a head injury, we watch for sedation or confusion,” he said. “If you give a person a narcotic pain medication, side effects include sedation and confusion. We know more about who is likely to get in trouble and who isn’t than when I started 24 years ago. We recommend that people try Tylenol or an anti-inflammatory like ibuprofen first.”

While most of the attention about head injuries is sports-related, Dr. Johnson points out that most concussions are not from athletics.

“The majority of the concussions that I see are people who have fallen and hit their heads or as a result of motor vehicle collisions,” he said. “The reason is the numbers. In any given year in Brown County, we have maybe 1,000 people playing football. We have five to 10 car accidents a day. There are thousands of people walking on icy sidewalks. Most of the attention has been focused in the sports world because that is where we can potentially predict it. The idea of getting people to wear helmets when they walk on icy sidewalks probably isn’t going to work.”

Dr. Johnson’s advice for parents of student-athletes is to keep things in perspective.

“There are a lot of positive things about sports:  leadership skills, teamwork and a lot of great reasons to play sports, but when it comes down to them having an injury, you need to be sensible about how important it is for them to play in the next game. At the high school level, 90 to 95 percent will not get athletic scholarships and will not play sports in college. Of the college athletes, 99 percent will not make a living playing sports. Sometimes we tend to lose our perspective a little bit.”