Not bad for someone who didn’t even expect to play Division I college basketball. Following a standout prep career at St. Mary Central, Frozena bypassed opportunities to play at Division III universities to attend Marquette. He tried out for the Golden Eagles as a walk-on as a freshman in September of 2007. In late November, Coach Tom Crean added Frozena to the roster following an injury to a scholarship player. He became a fixture on the squad. 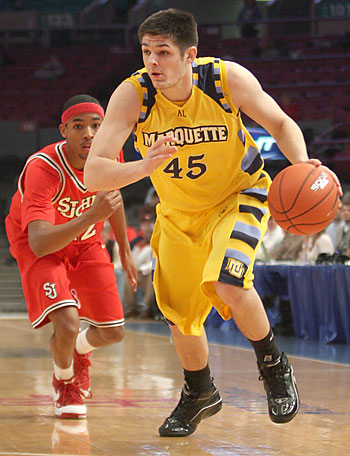 Rob Frozena dribbles the basketball during a game against St. John’s University at Madison Square Garden in New York City. Frozena is a graduate of St. Mary Central High School. (Photo courtesy of Marquette University | For The Compass)

“It’s been a blessing,” he said. “Coming into my freshman year, I never expected to have this experience and to meet so many great people. I feel privileged.”

Playing time is scarce for most walk-ons. Frozena appeared in 36 games for the Golden Eagles in his four years. He said that he devoted himself to helping the team by doing whatever was needed, whether that meant rebounding for a teammate who needed to take 500 shots or simulating the opponent in practice. Frozena describes Division I college basketball as a “full-time job.”

“(Rob) missed a lot of holidays and I can remember him having to go back to Milwaukee for practice on Christmas Day,” said his mother, Mary Frozena. “He never complained. In his senior year, I think he became an informal leader. He knew that he had to show the younger players by example.”

Mary added that Coach Buzz Williams was tough on Rob after he took over the program from Crean.

“Over the years, they’ve really come to respect each other,” she said. Williams has commented that he will be working for Rob some day.

“Buzz is an unbelievable guy and a great coach,” said Rob, who will graduate this spring with degrees in finance and marketing. “He doesn’t care about you as a basketball player, but cares about you as a person. He wants you to become a good husband, father or uncle. He’s taught us life lessons. He talks about finances, interest rates, crazy things like mortgage payments.”

Rob said that he has an interest in coaching, but only youth sports after he has children. His father, John, was active in youth coaching.

Rob’s athletic roots trace back to St. John-Sacred Heart School, Sherwood. Mary praised the sports programs and the values taught at the school. Rob and three of his classmates from a class of only 20 students competed in athletics all four years in college.

Rob ranks in the top 10 scorers in St. Mary Central basketball history. As a senior, he averaged 24 points, seven rebounds and four steals a game while helping the Zephyrs win the Olympian Conference championship. He earned all-conference honors in basketball, football and baseball in high school. Rob dismissed the rumor that he almost ended up playing for Xavier High School in Appleton, but was convinced to go to St. Mary Central by his uncle, Fr. Ken Frozena, a senior priest for the Diocese of Green Bay.

“The guys I played with when I was growing up were going to St. Mary’s,” he said with a laugh. “Uncle Ken didn’t tell me where to go.”

The St. Mary Central community turned out for Rob’s final game at the Bradley Center, March 2, versus Cincinnati. Three busloads made the trip. The St. Mary Central Choir sang the national anthem. Following the game, Rob introduced his family, gave thanks to God and thanked all who had supported him, including the late Ralph McClone, the legendary St. Mary Central basketball coach, who was a longtime family friend.

Rob grew up a Marquette fan, so playing for the Golden Eagles was a childhood dream.

“I really tried to soak it all in this season,” he said. “It really set in this year being a senior, going to Madison Square Garden, how lucky I’ve been.”

Not only has Rob played in historic arenas in the Big East, but he has also shared the court with current NBA players, including former Golden Eagles Wesley Matthews of the Portland Trail Blazers and Lazar Hayward of the Minnesota Timberwolves.

“I still look at them as teammates,” he said. “I don’t look at them as guys making millions playing basketball. They are still on my phone. I will be able to tell my kids someday that I played with those guys.”

Rob said that he has some employment opportunities. He plans to stay in the Milwaukee area and looks forward to being a Marquette alumnus and fan.

Mary said that she and John enjoyed the home games and the road trips over the last four years, but “It’s time for the next chapter.” She sees more good things in her son’s future.

“We have lots of wonderful memories and I have saved a lot of pictures and Web clippings,” she said. “It’s been an exciting time, but I think his story has yet to be written.”