Maria Torres, 30, is now Luis’ fiancé. The two were boyfriend and girlfriend for several years as teenagers while growing up in Puerto Rico. However, they grew apart and but both ended up in the United States. Thanks to the social networking Web site, MySpace, the two were reconnected in 2008. 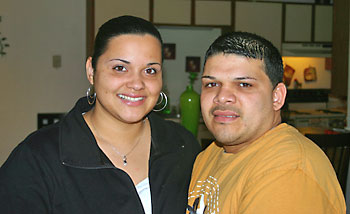 Luis Daniel Garcia will receive the sacraments of initiation at the Easter Vigil at St. Willebrord Church in Green Bay. Garcia and his fiance, Maria Torres, were high school sweethearts in Puerto Rico and reconnected online in 2008. (Eddie O’Neill | For The Compass)

“We hadn’t talked to each other in over 10 years,” noted Maria.

To make a long story short, all the emotions of young love returned to the couple and Torres decided to move to Green Bay from Connecticut in the summer of 2008 to see if this relationship was going to work; and so far it has. So much so that on May 7 the couple will be married at their parish of St. Willebrord.

Luis told The Compass that while he was baptized as an infant in the Catholic Church, his family never went to Mass nor participated in church events while he was growing up. On the other hand, Maria never really left the church. She credits her grandmother and mother for instilling strong Catholic values in her and her siblings.

When Maria arrived in Green Bay, she told Luis that she would like to attend Mass at a Hispanic parish. Luis did some asking around at his workplace, Kitchen Fresh Foods, and found out that St. Willebrord was the place to be. However, Maria, being new in town, wasn’t content in attending Mass alone and asked that Luis accompany her.

“It was somewhat strange at first,” said Luis. “Yes, I was a little afraid or apprehensive as I wasn’t sure what I was getting into.”

What they both found at St. Willebrord was a very welcoming and warm community.

“It felt like a family from the start,” Luis said.

The two approached Norbertine Fr. Ken DeGroot, pastor, about their interest in getting married. It was Fr. DeGroot who suggested that Luis should be first confirmed and make his first Communion before the wedding.

His preparation for the sacraments began late last fall. Due to his weekend work schedule, Luis was not able to attend the regular RCIA classes at the parish. Instead he received individual instructions from one of the parish catechists.

Sr. Melanie Maczka heads up the Hispanic ministry at St. Willebrord. She has been impressed with the zeal Luis has shown over the past few months.

“When Luis began his preparation, it seemed that he was doing it more to please Maria. But as time went on I could see his eagerness to learn more about his faith,” said Sr. Melanie. “I was told that he not only attended faithfully, but each time he came with more questions and interest. The joy evident on their faces when they come to church speaks clearly of their commitment.”

Maria couldn’t be happier with the fact that she will have a man of prayer and of deep faith next to her as they begin their new life as a married couple in just a few weeks.

“I am very excited and feel blessed that our future family is going to have a spiritual leader and guide in the home,” she explained. “I know he will enter our marriage well prepared and will have a strong foundation to build on.”

Luis will be joined by several dozen other catechumens at St. Willebrord at the Easter Vigil. He says he is anxious and excited to receive the sacraments and very motived to start serving in the community.

Both he and his future spouse are well aware of the adage that God writes straight with crooked lines. Both note that they have been a part of unhealthy relationships over the years and made some poor personal decisions in their own lives.

“We have learned our lessons,” said Maria, “and everything we have experienced in the past we hope to use for good now and on the road ahead.”

“We are looking forward to having a family and doing things right this time in the eyes of God,” added Luis.