Editorial cartoonist captures slice of life through his award-winning work

GREEN BAY — Drawing editorial cartoons is in Joe Heller’s blood. Even a new shipment of his favorite Mirado Black Warrior #2 pencils can make him giddy. “When you work with pencils every day, you notice” the quality, he said.

It’s the little things, Heller explained, like the pencil’s graphite core and its precision sharpness that give him satisfaction.

“It sharpens just perfectly and it’s got a nice feel to it — and the pure smell of cedar,” he said, holding the Mirado up to his nose, inhaling the wooden tip as if it were an expensive Cuban cigar.

As editorial cartoonist for the Green Bay Press-Gazette, Heller has sharpened many pencils while sketching his award-winning illustrations. He estimates he’s drawn about 6,500 cartoons for the Press-Gazette since starting his career there in 1985. 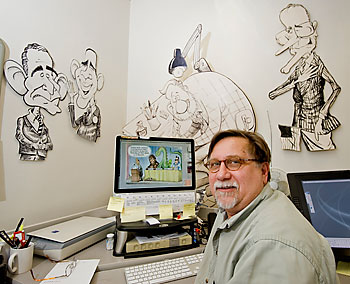 Joe Heller, editorial cartoonist for the Green Bay Press-Gazette, sits at his desk where he conceives and illustrates four to five cartoons each week. On the wall behind him are caricatures of U.S. presidents — George W. Bush, left, Barack Obama and George H.W. Bush — as well as one of himself. (Sam Lucero | The Compass)

Heller’s cartoons are syndicated nationally to more than 350 newspapers around the country and have been reprinted in national magazines such as Time, Newsweek and BusinessWeek. Heller has been recognized by his peers with eight Best of Gannett Awards, six Milwaukee Press Club awards and three John Fischetti Editorial Cartoon awards.

A member of St. Elizabeth Ann Seton Parish, Heller’s cartoons occasionally touch on religious topics, especially around Christmas, Lent and Easter. But like politics, poking fun at religion can be an invitation to criticism.

After learning about “Confession: A Roman Catholic App” for Apple’s iPhone, iPad and iPod Touch, Heller decided to create a cartoon response. (Apps are software applications that run on smartphones.) His cartoon shows a young man driving off a cliff while using his cellphone. As he crashes through a guardrail the man says, “A cellphone app for confessions? What will they think of next?”

Heller’s response at the bottom of his cartoon: “Coming next — an app for last rites.”

“I got criticized for that,” he said. A reader sent him a letter stating that the cartoon was anti-Catholic and that Catholic bashing was “the only acceptable prejudice” appearing in the newspaper.

Putting opinion, humor and illustration together to trigger reader response is a challenge that Heller faces four to five times each week. “These are elements that go into a cartoon, but you have to juggle them,” he said. “Some are funny, some are not. Other times it’s my opinion or I play the devil’s advocate. When everybody is marching to a drum and going in one direction, I throw a cartoon out there and say wait, look at this position.”

Heller said he marched to his own beat while attending Custer High School in Milwaukee. “I was the kid in high school who was always doodling,” he said, but he never worked for his school newspaper.

Some of his teachers saw Heller’s artistic talent and allowed him to use it in other ways.

“They let me draw homework assignments,” he said. “We were reading ‘Great Expectations’ (in a literature class). Somehow I talked the teacher into letting me draw the characters.” He would take large sheets of newsprint home and draw many of the characters in Charles Dickens’ novel. Rather than write an essay, he handed in his sketches.

“That worked really well in literature, but not so much in math,” he quipped.

Although he did not work for his high school paper, or at the student paper at UW-Milwaukee, where he received his bachelor of fine arts degree, Heller said he was drawn to editorial illustrations.

His first job right out of college was as part-time cartoonist and graphic artist at the West Bend News.

“I started distributing some of my cartoons to newspapers across the state around 1979,” he said. “Green Bay picked up a few cartoons and then in 1985 they gave me a call out of the blue.”

Heller and his wife, Pamela, were married in 1983 at St. Frances Cabrini Church in West Bend. Born a Lutheran, he entered the Rite of Christian Initiation of Adults and was received into the church at the Easter Vigil in 2000.

“On the family level I wanted to be part of the group,” he said about becoming Catholic, adding that his daughers, Chelsea, 22, and Breanna, 19, were raised in the Catholic faith.

“On the personal level, I’m a guy of symbols and I’m a guy who uses metaphors and stories to get a point across,” Heller said. He found these same qualities abundant in the Catholic Church. “That’s what drew me in.”

His most popular cartoon with a Catholic focus appeared on April 2, 2005, the day Pope John Paul II died. It showed John Paul walking on a beach, crozier in hand, with giant footsteps behind him. At the bottom right were the words, “John Paul II 1920-2005.”

Touching an emotional chord through his work is one of the joys Heller occasionally experiences. The most dramatic example is a cartoon that was published on Sept. 11, 2001.

Heller said he was at the Press-Gazette newsroom on 9/11 and watched the terrorist attacks unfold on television with co-workers.

“I called my wife to make sure everything was OK and she said that when she was younger she was on a field trip to New York” and visited the Statue of Liberty, he said. “Back then the Twin Towers were still being built and you could see them” from the statue.

“That clicked — the connection between the Statue of Liberty, what it represented, and the World Trade Centers, which represented commerce,” added Heller. “I put those two together and came up with that cartoon.”

The illustration showed Lady Liberty, sitting on her perch with hands covering her eyes. In the background is smoke bellowing from the Twin Towers.

The cartoons sold for $10 each, with all the revenue — which included extra money people contributed as gifts — donated to the Sept. 11 Victim Compensation Fund. “I handed over a big check for over $100,000,” said Heller. “To this day, almost 10 years later, I get people saying, ‘I got that cartoon sitting in my office.’ It kind of makes you think twice about what you do and how you can affect people.”

The power of the editorial cartoonist’s pencil hasn’t prevented their dwindling numbers on newspaper staffs. “When I started, there were about 250 cartoonists nationally and now there are probably about 70,” said Heller. Thirty years ago, he was one of four newspaper cartoonists in Wisconsin. Today he’s the only full-time cartoonist in the state.

Newspapers are choosing to use syndicated cartoons rather than hire their own cartoonists or replace those who retire, said Heller.

But the dearth of cartoonists does not mean a lack of interest in cartoons. Heller believes people continue to enjoy editorial cartoons because they appreciate witty commentary mixed with catchy sketches.

“I take all of these heavy issues and distill them down, put them into a cartoon form that somebody is going to read in about 15 seconds and understand what’s going on before they move on to the sports page to read about the Packers,” he said, demonstrating his wry, cartoonist humor.