“I would only go to Mass the weekends I would play,” said Kotanen. “I still wasn’t a firm believer. It was a gig. I got paid to go to church, so why not go? I would show up one week and take off for three, four weeks.”

Kotanen was baptized Lutheran, but left the church as a child with his mother. They also spent time in a nondenominational church. 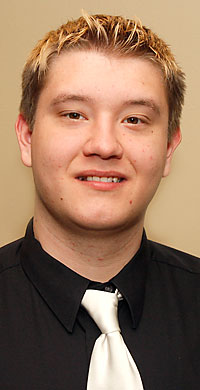 “I got sick and tired of hearing the same thing: ‘Jesus loves me, Jesus loves me.’ I want more than that,” he said. “There were four years where I just stopped going to church.”

Music brought Kotanen to the Catholic Church, where he would discover his faith. He recalls an overpowering feeling when he first walked into St. John the Baptist for rehearsal. His spiritual excitement continued to grow over time as he shared his musical talents at Mass.

“I feel joy whenever I’m (in the church),” he said. “I don’t want to go home because I get this energy and it makes me feel really good. Karen said ‘Maybe it’s because of Jesus in the tabernacle.’ She is probably right. I just feel good when I’m here. If I come here sad, I will leave happy.”

Kotanen will make a full profession of faith and receive confirmation and first Eucharist at the Easter Vigil at St. John the Baptist. Pufall is serving as his sponsor.

“He has been a good friend of mine and a father type figure to me,” said Kotanen. “I was a student of his at Bay Port (High School). He got me started in piano. He saw something in me. We clicked and became very close.”

Kotanen said that he is especially anxious to receive holy Communion for the first time. Reflecting on his faith journey, he points to an experience as a fourth grader as planting a small seed of Catholicism.

“I found a rosary on the sidewalk and put it on,” he explained. “This Catholic lady, an elderly woman, said, ‘Shame on you, you know better than to wear that as a necklace.’ I said, ‘Lady, what are you talking about?’”

Kotanen and the woman cleared up the misunderstanding. She had assumed he was Catholic. The incident prompted Kotanen to explore the rosary.

“It always stuck with me,” he said. “I would pray the rosary. I wasn’t doing it right. I had this printout, but I wasn’t holding it or doing it correctly.”

A faith experience in October of last year confirmed Kotanen’s commitment to the Rite of Christian Initiation of Adults (RCIA). Jody Engebos, coordinator of middle school and high school ministry at the parish, invited him to serve as a chaperone at St. John Bosco Youth Day at Holy Hill in southeast Wisconsin.

“I was on the fence about it,” said Kotanen. “I first said that I didn’t want to do it, but later reconsidered. Something told me to go. I heard Fr. Stan Fortuna (at the event). He had so much energy and is an awesome musician as well.

“I was surrounded by a bunch of Catholics,” he added. “I said to myself, ‘These people are in tune with their faith. They know what’s going on and it’s all by free will. I want that. I want that part of religion.’”

Kotanen serves as a piano and voice teacher and is taking classes at Northeast Wisconsin Technical College. He is a member of the Dudley Birder Chorale at St. Norbert College. Next spring, he plans to transfer to St. Norbert with plans of becoming a choir teacher after graduation.

The music at Mass means more personally now that he’s engaged in his faith, said Kotanen. He finds strength to help him in the ministry.

“I couldn’t do it without some higher power working through me,” he said. “Whenever I’m down, when I’m struggling with a song, I look at the crucifix and say ‘take over,’ and sure enough, it comes to me and I just go with it.”