“Most people seem to know that it’s biblical, but they really have no idea what it is,” she said. “It’s a reenactment of the flight of the Israelites, including the 10 plagues.” 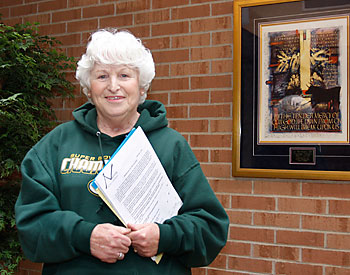 Connie Nedohon, who has organized a Seder meal for Nativity of Our Lord Parish in Ashwaubenon, for the past 10 years, said the event represents a personal faith journey. This year’s Seder meal, to be held at the Riverside Ballroom, will benefit St. John’s Homeless Shelter. (Rick Evans | For The Compass)

The evening begins with a festive meal featuring lamb or chicken as the main course. Participants then move to a second room for the Seder reflection. Seder customs include drinking four cups of wine, eating matzah and the partaking of symbolic foods placed on the Passover Seder Plate. The story of the Passover is told within the story of the Israelites.

“It’s really something beautiful happening,” said Nedohon. “We have all kinds of music. There’s singing, dancing, Moses dancing. There are all kinds of sound effects, the thunder, lightning, animals, women and children screaming.”

The first Nativity Seder meal was held 10 years ago in the basement of a home. The celebration has grown throughout the years. Nedohon had to turn people away in the past due to limited space. The Riverside, which donated the space, should support a larger crowd, she said.

The Seder Meal represents a personal faith journey for Nedohon. She moved to Wisconsin in 1999 following a career as a Latin teacher in New York.

Initially, Nedohon didn’t like the Green Bay area and planned to go home in 2000. A series of events changed her mind, including an invitation to participate in her first Koinonia (a retreat based on the paschal mystery). Nedohon, who grew up in an Irish Catholic family in Boston, had been away from the church for 33 years.

“How they got me to a Catholic retreat in Luxemburg, I have no idea,” she said, “but the Holy Spirit did. My life took off back to God again.”

The reenactment centers on a Jewish family. The cast from various parishes includes Mike Gorniak as the father, a role played by Bishop Robert Morneau in the first offering 10 years ago. Rae Wetzel will portray the mother, Bill Woods will be Moses, Jane Jelinek will be Miriam and Jack O’Neil will provide the voice of God. Brandon Anderson will play the son and Nedohon’s 7-year-old granddaughter, Madison Nedohon of Indiana, will play the daughter. Marilyn Johnson will serve as the speaker, Carolyn Steeno as the reader and Nedohon once again will be the commentator. Gail Delleman will serve as the guitarist for the production.

“Through the years I just keep meeting different people,” said Nedohon, who has returned to teaching Latin. “It’s been phenomenal. God has done so much for me in my life. I really believe that God brought me to Green Bay to find him again.”

Nedohon hopes the Seder has a profound effect on those who participate.

“I think they will take an appreciation of what God did to free the Israelites as people,” she said. “I want them to realize just how much God went through and how much he cared for his people.”