The priest thought a little more and said again, “It was amazing that nobody got hurt.” 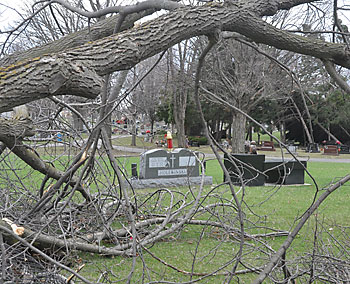 The tornado damaged or destroyed at least 160 homes in Kaukauna. Also damaged was the St. Mary site of St. Katharine Drexel Parish, including two school buildings, the rectory/office and the roof of the 1898 church.

A bingo game was in progress in the church basement when the tornado struck and players’ cars in the parking lot were damaged. A heating unit from the school roof was torn off and tossed into the same parking lot. However, no one inside the church was hurt.

“It was probably the safest place (to be) — in the basement of the church,” Fr. Pastors said.

On the same property is the headquarters for Elizabeth Ministry International, housed in the former St. Mary convent. It lost its back porch, storm doors and garage door, several windows and trees.

Two volunteers normally live on-site, but both were away at the time, according to co-founder Jeannie Hannemann.

“Two windows were broken through completely — one in the bathroom and one in the business wing, so there is lots of glass to clean up,” Hannemann said. “It’s going to be a mess to clean up.”

However, she added, none of the many windows of the gift shop broke through, so all the Elizabeth Ministry products were spared, as was the chapel — which had one window broken. 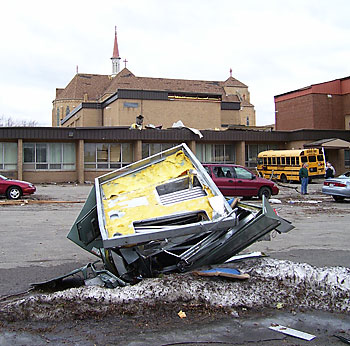 A heating unit lies in the parking lot of the St. Mary site of St. Katharine Drexel Parish in Kaukauna April 11 after a tornado touched down April 10. At least 160 homes in Kaukauna were damaged in destroyed. (Patricia Kasten | For The Compass)

Kaukauna’s police chief, Jon Manion, reported at an April 11 press conference that, despite damage likely to total well over $1 million, no one in the city was hurt. He attributes this to the tornado warning sirens, which he said sounded six times that evening.

The warnings probably saved lives across the state which, according to the National Weather Service, tied its worst single day on record in April for tornadoes. There are confirmed 10 tornadoes so far, including Kaukauna and one near the town of Winchester in Winnebago County, with damage in the Neenah area. St. Mary Central High School in Neenah/Menasha was closed April 11 and 12 because power lines in the area were down.

Barb Breest, who lives in nearby West Bloomfield, is religious education coordinator at St. Mark in Redgranite and Sacred Heart in Poy Sippi. She said many barns were down in the area.

“Along County A (just west of Poy Sippi), almost all the farms had damage,” Breest said. She noted that the woods and fences along roads and highways were “plastered with debris” with “whole roof sections across roads and in the fields.”

However, even in the night, after the storms cleared, Breest saw people out with chainsaws to help neighbors clear debris. They also put up electric fencing to corral dairy cows made homeless by collapsed barns.

“There was a lot going on,” Breest said. “Neighbors were calling (to check on) neighbors. … The wonderful thing is that all the people were helping each other. All these people were volunteering their time — maybe they even weren’t going to work on Monday so they could help their neighbors.”

Fr. Pastors saw the same spirit of helping others — even strangers — in Kaukauna.

“It was pretty incredible yesterday (April 11),” he said, “all the people coming out to help and parishioners came. Most of the (clean-up) was done yesterday.”

He even told of an out-of-town couple who came to the parish parking lot on Monday with water, soda and sandwiches so the volunteers could have something to eat.

“I never did get their names,” the priest said.

As an aftermath of the storms, flood warnings remain in effect in Outagamie, Shawano and Waupaca counties for rain-swollen streams and rivers, such as the Wolf and Embarrass Rivers.

Tammy Basten, director of Facilities and Properties for the Green Bay Diocese, said an insurance adjuster had already visited all the reported damaged properties by April 12. A total of storm costs had not been made at press time, but is expected in a few weeks. Below is a list of the damaged properties in the diocesan area, as reported by April 12.