A commitment to pro-life cause

The 40 Days for Life program started in Bryan/College Station, Texas, in 2004. It is a community-based campaign that draws attention to the evil of abortion through the use of a three-point program consisting of prayer and fasting, peaceful vigil and community outreach. The following year it spread to a number of other cities across the country. When Green Bay hosted their first event in 2006, Sheehy and his wife Dorothy joined the vigil. 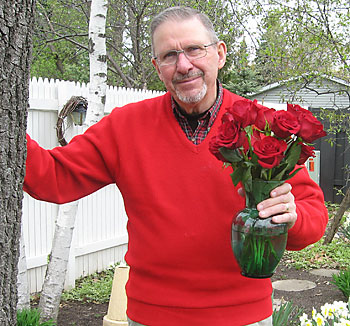 “In 2007 there was a meeting to get a 40 Days started in the Fox Valley,” recalled Sheehy. “They were looking for people to be reps from various churches. I said I’d represent St. Pius.” The person who originally was going to chair the vigil chose not to do it, so Sheehy said he’d be willing to help. “Within a week a letter went out to all the churches in the Fox Valley introducing the 40 Days program for that fall and they listed me as the coordinator, along with Tim Hewitt,” said Sheehy.

It took a tremendous amount of legwork to get this initiative going. “Tim and I got things coordinated all the way from getting Porta Potties out there at the Community Church to talking with the Grand Chute police and telling them what we were doing. Right from the get-go Alicia Romnek, who at one point in time was the chairperson for Wisconsin Right to Life-Fox Valley, was quite active in supporting this too.”

During his time as chair, the 40 Days for Life Grand Chute Vigil grew tremendously. “Tim and I were doing recruiting the first year or two pretty much by ourselves,” said Sheehy. “In 2009 Tim and I connected with the pro-life group out of Neenah/Menasha. There are people over there who stepped up and helped. Jeanne Griffith, a member of St. Mary’s in Menasha takes phone calls and e-mails for sign ups.”

Around that same time the folks in the valley started to get a lot of support from the Green Bay 40 Days for Life group. “Initially it was difficult to get even an endorsement from Green Bay because they didn’t know us. Then Bishop (David) Ricken came along and he was actively pro-life. He re-established the Respect Life Office at the diocese and brought on a respect life coordinator; she promotes very actively, including 40 Days for Life.”

One of the most rewarding experiences happened last year for Sheehy.

“Instead of us beating the bushes and making calls and recruiting like mad, parishes started calling us,” he said. “We had parishes that we had knocked on the doors several times, talked to pastors, tried to find respect life coordinators, nothing worked and all of a sudden these parishes were calling us and saying, ‘Can we coordinate a time slot each week?'”

In 2010, numerous groups stepped up to fill two-hour weekly slots for the vigil. These included 20 churches from the Fox Cities to Fond du Lac, the Knights of Columbus, Xavier High School Rock 4 Life Club, Catholic Youth Expeditions and other local pro-life groups representing people of all faith backgrounds.

Sheehy said all volunteers must sign a “Statement of Peace” before participating. During their shifts volunteers hold up signs that say “Pray to End Abortion.” Some Catholics choose to pray the rosary, but in general everyone just prays.

Because of what Sheehy called, “too many senior moments,” he decided to step down as chair of 40 Days for Life Grand Chute Vigil. He still plans to take a shift this October and encourages other people to do the same. He’s hoping someone will step forward to take the position he has vacated.

Sheehy has his eyes on one goal as the 40 Days for Life effort continues in Grand Chute. “Ultimately it is to close that facility. It has happened. 40 Days for Life has 250 locations all over the world and there have been closings,” he said. “That would be the ultimate hope.”