Stutz, 68, has been a member of St. Jude the Apostle Parish (formerly Sacred Heart) since birth. He was baptized and attended school there. He said he was on the parish council when the cemetery board was dissolved many years ago. He agreed to take over and got volunteers to help run the board and maintain the cemetery. 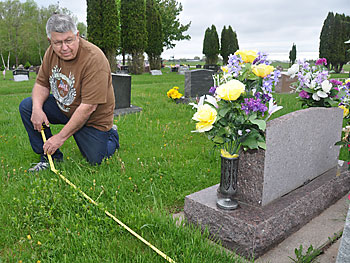 Jim Stutz uses a measuring tape to find the boundary location of a grave plot. Stutz, a member of St. Jude the Apostle Parish in Oshkosh, also uses a metal detector to find plot boundaries. (Dick Meyer | For The Compass)

“It’s something that doesn’t get notoriety or that most people think about,” Stutz said. “It seemed like the right thing to do. Just because the person’s dead doesn’t mean they’re gone. There are a lot of people out there who don’t have anybody to take care of them anymore. You see some things may be going to pot out there, and you just want to fix it up.”

As Memorial Day approaches, volunteers are placing flags on the graves of veterans. Now is the cemetery’s busiest time, Stutz said. Spring cleanup is done and people are placing fresh floral arrangements on grave sites.

Stutz said the cemetery board arranges for the grass to be cut in the summer and clears out old floral arrangements, wreaths and debris twice a year — on a Saturday near April 15 and Oct. 15. Students from Lourdes High School help.

Once the cleanup dates were established, he said, many people typically have cleaned their loved ones’ grave sites themselves. “Now it’s just a morning deal.”

The cemetery committee also arranges to have trees and greenery trimmed, maintains the roads and monitors the location of grave site stones and markers. Stutz said grave sites are marked with metal stakes underneath the ground, so he uses a metal detector to find the boundaries and indicate where markers should be placed.

Two columbariums, mausoleums for cremated remains, have been constructed, and the cemetery board’s beautification committee has added a child’s memorial for people who have lost children. Another project, up on a hill around a cross, is adding a walkway, Stations of the Cross and an altar.

These projects are being financed by selling individual bricks in the names of families or departed loved ones, as well as benches and the stations.

Other financing has come from fund-raisers, donations and sales of grave sites. Many of the graves are for non-Catholics or out-of-state residents. He said they’ve even gotten burial inquiries from members of the Experimental Aircraft Association because of the cemetery’s proximity to the EAA AirVenture Museum and Wittman Regional Airport where the EAA holds its fly-in convention each year.

“You got to watch what you’re doing with finances,” Stutz said. “We only sell so many graves a year, and it isn’t a steady or sure income all the time. We still have to maintain the cemetery.”

Things are sure to change this year because maintenance of the three Catholic cemeteries in Oshkosh has been combined. While St. Jude the Apostle has always maintained Sacred Heart Cemetery by itself, maintenance of Calvary Cemetery and the Catholic section of Riverside Cemetery has been handled by the Green Bay Diocese.

As of Jan. 1, the care of the cemeteries has been taken over by a new, nonprofit corporation called Catholic Cemeteries of Oshkosh, Inc. It is owned by the three parishes, Most Blessed Sacrament, St. Jude the Apostle and St. Raphael the Archangel.

Tom Donovan, business administrator for Most Blessed Sacrament and St. Jude the Apostle, now is also the cemetery administrator. He says this move will make cemetery maintenance more local and bring it back closer to the parishes.

Stutz is now on the advisory board of the new corporation.

Although the partially finished Stations of the Cross is on hold at Sacred Heart Cemetery and Stutz’ role is changing, he said what won’t change is the commitment to maintaining the cemeteries as a memorial for the people who are buried there.

“There are a lot of good people out there,” he said. “It’s amazing how many people come up and tell me ‘thank you.’ They see what the cemetery is like, and they appreciate it. Those are people’s loved ones out there. (When the cemetery looks nice), it lessens the pain of death a little. You don’t want to bury them in an unmaintained place and forget about them.”