Gift of a second language led jubilarian around the world

Educated in Catholic schools, Sr. Helen was taught by School Sisters of Notre Dame at St. Leo School. She then moved on to Holy Redeemer School, served by the School Sisters of St. Francis, before attending Messmer High School. She credits her father for first mentioning religious life when she was a child.

“He used to go on retreats every year,” said Sr. Helen. “He came home one year and brought me a tiny statue of St. Therese of Lisieux. That was something very special. He said, ‘Maybe you will grow up and become a sister like her.’ It was a seed planted and nurtured. I remember praying as a young child, asking God, ‘What are you going to do? What am I going to be when I grow up?'” 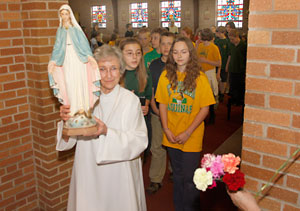 Sr. Helen Plum is parish director at Ss. Joseph and Edward Parish in Walsh and St. Mary Parish in Peshtigo. Here she leads the children of St. Mary School around the Peshtigo church during a May crowning on May 6. (Rick Evans | For The Compass)

Throughout her teen years, Sr. Helen questioned if religious life was right for her, but eventually knew she was being called. Following high school, she entered the School Sisters of Notre Dame (SSND). She professed first vows on July 31, 1961, and thus will mark her 50-year anniversary this summer.

Sr. Helen studied German and sociology at Mount Mary College in Milwaukee, but desired a degree in theology.

“In the ’60s, that was not recommended because there was a lot of unrest,” she said.

She also wanted to teach and was given that opportunity, beginning in 1963. She would serve as an educator for 17-plus years.

“I taught first grade at St. Stephen in Stevens Point for five years. That was during the Second Vatican Council,” said Sr. Helen. “We formed a group of sisters, priests and brothers and gathered together once a month. We read and discussed the documents of Vatican II. That was so life-giving.”

Sr. Helen was teaching in Rudolph, Wis., when she received another call. In 1980, she left for Rome to serve her community as a German-English translator. She translated the community’s constitution, “You are Sent.”

“They gave me a one-way ticket from Rudolph to Rome,” she said. “It was a tremendous leap of faith to get on that plane by myself and travel to Rome.”

When she wasn’t translating, she spent time in Germany working on her language skills and substitute teaching in a Catholic school. Her translating skills then brought her to an international conference of SSND leaders in Sao Paulo, Brazil. Periodically, until 2004, Sr. Helen served as a translator on other documents and at SSND general chapters and meetings. She first arrived in the Diocese of Green Bay in 1983 for a short teaching stint at St. Vincent de Paul School, Oshkosh. The position was one of transition following her continuous translation work.

“I remember standing in the classroom and, all of a sudden, I didn’t know which language I was speaking,” she said.

Along the way, she achieved her goal of earning a degree in theology through St. John’s University, Collegeville, Minn. Sr. Helen served as a pastoral associate and liturgist in the diocese from 1988 to 1997 at Resurrection Parish in Allouez, prior to a four-year term in leadership for the School Sisters of Notre Dame. She returned to the Green Bay Diocese in 2002 as a pastoral associate at St. Mary Parish, Peshtigo, and Ss. Joseph and Edward Parish, Walsh. She was appointed parish director of the linked parishes in 2005, the position she continues to serve in today.

“I love my present ministry,” she said. “I’m walking with people through their joys and their sorrows, the funerals, the baptisms. I am now seeing the children coming for first Communion who are the children of the parents that I prepared for baptism. That’s kind of neat seeing them grow up.”

Sr. Helen said that she would like to serve for a few more years, as long as her health continues to be good. She has a number of celebrations scheduled in honor of her jubilee, including gatherings with the parish communities.

“I love the parishioners,” she said. “They’ve been very supportive.”

Sr. Helen added that she is thankful for all the places she has served and the people she has met over the past 50 years. She has adapted to life moving between big cities and small towns.