“Amazingly, as late as we planted the garden last year, it produced really well,” she said. “We picked a lot of radishes and had an abundance of beans and tomatoes. We planted a variety of heirloom tomatoes. The plants were donated by the UWGB greenhouse. We didn’t even know what we were growing.” 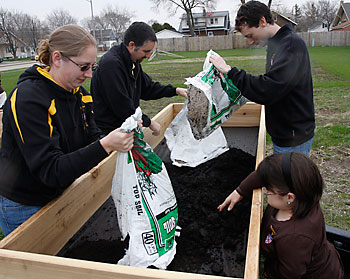 This season’s garden will feature raised boxes, made available through the efforts of the Volunteer Community, a business class at St. Norbert College and a grant from Lowe’s.

“The boxes are actually on stilts, so they are not at ground level,” said Koeppel. “We are hoping for more community members to lease plots this year.”

Those who want their own patch of the garden can lease an area for a $35 deposit. If the plot is maintained throughout the season, including cleaning it at the end of the harvest, the deposit is returned. If the patch is abandoned, the program keeps the $35.

“They can grow their own stuff as long as it’s legal,” said Mommaerts. “It states that in the contract. They take care of their own piece. There are a lot of places around here that are rental properties, so they can’t just tear up the backyard for a garden. The community portion of the garden is a group effort and everyone can benefit from that harvest.”

The Norbertine Volunteer Community featured six members in 2009-2010. Koeppel, Mike Brennan and Angela Knutson formed the second community in August. Stephanie Birmingham and Kyle Cothern joined the group in January. While serving those in need is the focus, the volunteers grow personally through their efforts.

Birmingham, a Sturgeon Bay native and 2009 graduate of St. Norbert College, assists Carrie Arnold, chaplain at the Brown County Jail, in addition to serving at Golden House. Birmingham meets one-on-one with inmates and helps coordinate a group program entitled “Houses of Healing,” which addresses issues of grief, forgiveness, anger, meditation, relaxation and spirituality, if desired by the inmate.

“I will be entering UW-Oshkosh for my master’s in counseling, so this has been a wonderful way to get my feet wet and really learn what it means to try to be present to other people and recognizing the challenge of not being able to meet everyone’s needs,” said Birmingham. “I’ve realized that oftentimes a listening ear is good enough.”

Cothern, who is from Kokomo, Ind., has also assisted at the jail and Golden House. He was attracted to the community as a means to take a closer look at the Norbertines. He said that among the learning experiences in working with inmates is meeting them where they are, especially spiritually.

“Their time in jail is to put their lives back together,” he said. “If reconnecting with their spiritual center and their faith fits into their picture, that’s wonderful. If not, we don’t push them.”

Koeppel and Brennan have worked with inmates post-release through Circles of Support. “It’s really been an eye-opening experience,” said Koeppel, a Wittenberg native. “I think about when I leave here and how am I going to pay for an apartment. If I really need help my parents are there. I have my family. That’s something many of these people don’t have in their lives.”

Brennan also does presentations in the schools through Golden House. Among Knutson’s service efforts is coordinating a reading program at Nicolet School. The challenge moving forward is to sustain the ministries and outreach provided, said Mommaerts.
“The ultimate goal is to establish some consistent internships,” she said. “We don’t want to leave ministries hanging. It creates a conflict at some level if we’ve been involved in all these really good things, but kind of let it go when this group moves on at the end of June.”

Brennan, a 1999 graduate of St. Norbert College, who is also from Indiana, will be moving on to the Norbertine Order in August. He has been formally accepted. Being a part of the volunteer community has provided opportunities for continued discernment, he said.

“It’s been a very humbling experience, especially because of the populations I have worked with closely and just recognizing that the needs out there are great,” he said. “It’s given me a greater sensitivity and awareness.”

Living in community also provides for personal growth. The housemates share cooking and cleaning duties and leading morning and evening prayer. Birmingham, who requires the use of a wheelchair, praised her peers.

“My fellow community members have been really wonderful,” she said. “They’ve been flexible and adaptive in allowing me additional attention that a disability needs.”

“Steph moving into the house has created better awareness and has made it more accessible,” said Mommaerts. “We’ve learned some things like the light switches being too high. She has been phenomenal in terms of adaptability.”

The group finds time together outside of their service. They participate in social outings such as cosmic bowling and spiritual endeavors, including a retreat at the Bridge-Between in Denmark. Members receive a monthly stipend and health insurance.
Recruitment for the third year is already under way. Koeppel said that awareness of the community is growing.

“We were at a volunteer fair at Notre Dame in South Bend,” she said. “People came up to us knew who we were. That was a great feeling. When I leave here, I hope it continues to grow. I tell people, ‘Check it out; do a year of service.’ I’m glad I’ve had both experiences.”

To apply or more information on the Norbertine Volunteer Community, visit www.norbertines.org/ volunteer_community.