An old plaster bas-relief depicting the Last Supper was lovingly restored by Pahlow and has been hanging in the Blessed Sacrament Chapel of St. Raphael the Archangel Church since 1999. Each year on Holy Thursday, the plaque is brought into the main church for all to see. 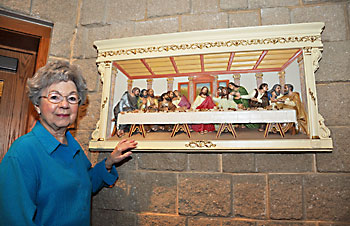 Dolly Bahlow stands next to a bas-relief of the Last Supper that she restored in 1999. The wall sculpture, which hangs in the Blessed Sacrament Chapel at St. Raphael the Archangel Church in Oshkosh, is moved to the church proper every year on Holy Thursday. (Dick Meyer | For the Compass)

But the bas-relief wasn’t always so beautiful. It was donated to St. Raphael in 1998 by parishioners planning a move to Arizona. They had purchased it at a rummage sale for $2.50 and had stored it in their basement for 25 years. Fr. Dan Felton, then pastor of St. Raphael’s, knew Pahlow did restoration work and called her.

The figures on the bas-relief  had broken fingers and noses, Jesus’ beard was off, there was chipped paint and everything on the plaque needed attention.

“It was in such a dire condition,” Pahlow said. “It was so damaged, it surely was a challenge.”

Pahlow took the sculpture home and worked on it little by little. In all, it took about 168 hours to restore the plaque to reverent beauty. It was finished in March 1999.

“Sometimes, in the old-time altars, they would have picturesque plaques depicting certain scenes of biblical times,” Pahlow said. “That’s where we think maybe this plaque came from. I was glad it came my way to restore it.”

This restoration is a remarkable testament to the evolution of Pahlow’s career as an artist. Now 85, she has been an artist all of her life. She painted in oils, is a longtime member of the Oshkosh Fine Arts Association and did many art fairs. As she got older and moved into an apartment, she gave up painting.

In 1985, she was contacted by Mercy Medical Center about an old Nativity set that had been found in the basement.

“It evidently was brought over (to the United States) by the German nuns,” Pahlow said. “Heads were off, angel wings were missing. They wanted somebody to fix this Nativity set. I thought, ‘Nothing ventured, nothing gained.’”

Pahlow has never had any training in restoration work. “Just common sense went along with it,” she said. “Through trial and error, I figured out the products that I use, how to put a head on a body or a statue so it wouldn’t come off. I found ways to support what is broken. I never dreamed I would be doing this type of work. I’ve never had any schooling to learn this — it’s instinct and God-directed.”

She next worked on a five-foot statue of the Sacred Heart of Jesus that had been above a nurse’s building.

“I think religious statues came out of the attic when that (story of her work) hit the newspapers,” she says. “People didn’t want to throw them away.”

She said working on religious items is a religious experience for her.

“It is quite emotional for me while working on these things,” Pahlow said. “As you’re working on the Last Supper, you’re thinking, ‘What could they be talking about?’ It goes through my mind. When I did the statue of the Sacred Heart, it was five feet tall. We were looking into each other’s eyes. It’s always emotional for me.”

As Pahlow’s expertise became more widely known, she has come to fix all manners of items for people, such as dishes, saucers and knick-knacks.

“It was just unbelievable the things that would come my way,” she said. “They are all treasures that people like to have on hand. People bring me their broken treasures and they get their little treasure back that’s all fixed and proper again.”

She also repairs broken items that have been donated to the local St. Vincent de Paul Store so that they can be sold in better condition.

Pahlow said she would love to find an artist that she could teach to take over her work when she can no longer do it. But for now she is grateful to be doing what she is doing.

“I enjoy it,” she said. “I think it was God-designed that this came my way. I’m thankful my hands work and don’t shake. I have a clear mind and good eyesight. I have all that I need to do God’s work with his blessing. It’s gratifying work to do.”