“The main purpose of the convention is to elect state officials, delegates and alternates to our Supreme Convention, which will be held in August in Denver, Colo.,” Wrbanich told The Compass. 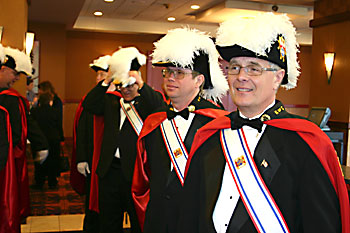 He said the gathering also includes reports from various state offices and committees, and recognizes individuals and councils for their achievements throughout the year.

Knights new and old were in attendance for the Saturday program.  Making the trek from Oregon, Wis., and Holy Mother of Consolation Council 13486 were Tim LaBron and Jim Vogt. It was only the second convention for Vogt, who described his Madison-area council as a very active group.

“One of the projects we did this past winter was to shovel snow for the people who couldn’t get out,” Vogt said.

LaBron has been a Knight for 28 years and met up with his father, Don, at the convention. Later this year, Don will mark his 50th year as a Knight of Columbus.

“While I have seen a lot of changes over the years,” said Don, “the ideals stay the same. That is (that) we exist to help others, the community and our church and one does not have to be a Knight to get help from us.”

Carmelite Fr. Cyril Guise from Holy Hill, Wis., said that he had been attracted to the Knights of Columbus, in part, because of their emphasis on the value of family.

“The Knights began based on family, “said Fr. Guise. “Family should be the primary focus.”

Fr. Guise has been a Knight for over 15 years and serves as chaplain for the Knights based at the National Shrine of Mary, Help of Christians at Holy Hill. In August, he will celebrate his 60th anniversary as a member of the Carmelite community. He was one of half a dozen or so priests who concelebrated the Saturday evening Mass with Green Bay’s Bishop David Ricken, Archbishop Jerome Listecki of Milwaukee and Bishop Robert Morlino from Madison.

In his homily, Bishop Ricken noted the significance of this particular May 1 on the calendar. He reminded the congregation that, while the day traditionally marks the feast of the St. Joseph the Worker and the start of the month dedicated to the Blessed Mother, this year it was also the feast of Divine Mercy and saw the beatification of Pope John Paul II in Rome.

Bishop Ricken commended the Knights for all the “constant sacrifice and works that you offer for the benefit of the church and encourage you to continue to be the eyes, arms,  feet and hands of mercy of Jesus Christ.”

He also noted that much of the work done by the Knights since their beginnings has been devoted to the corporal works of mercy, such as a clothing the naked or visiting the sick.

“I would invite you to do these corporal works of mercy with a greater intentionality of love and mercy,” the bishop said, “so that Christ may use you and pour out through you. Let us not allow people to be cared for just in their corporal reality or in their body needs, but (also) that through these actions  people will  be able to see that God loves them and wants to pour out his mercy upon them.”

Mass was followed by a social and an awards banquet.