Wilson holds her own on the golf course

St. Thomas Aquinas offers golf as a spring sport, so Wilson competes with and against the boys. 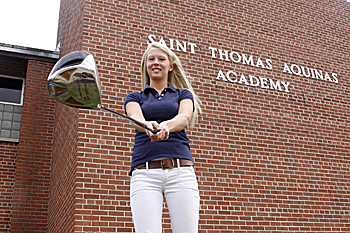 Lexi Wilson is the top golfer this season for St. Thomas Aquinas Academy, Marinette/Peshtigo. Golf is a spring sport at the school, so the junior competes against boys in WIAA matches and tournaments. (Rick Evans | For The Compass)

“I was kind of scared to be on the guys’ team at first, but my good friend, Joey Collard, was the number one player. He wanted me to be on the team,” she said. “The first couple matches were kind of scary, but after that it was fine. Most of the guys on my team were my close friends, so they made it really easy for me. I’m the only girl on varsity in the conference. Now that I’ve played for three years, I know most of the other players (from other schools), so it’s not bad at all.”

Wilson’s grandparents are golfers. She credits them with getting her started in the sport. She played in par-3 leagues as a child, but really didn’t commit to the game until her freshman year of high school.

“I played off and on, but not really seriously,” said Wilson. “I love golf now. It’s definitely my favorite sport. I probably play at least three hours a day. I like that you can play golf for the rest of your life. It doesn’t end after high school or even college.”

Wilson also plays basketball for St. Thomas Aquinas. She led the team in scoring this past season and earned second team all-Marinette and Oconto Conference honors. The transition from the court to the golf course takes some getting used to, she said.

“I’m used to running,” she said. “You use different muscles. I like going from a team sport to more of an individual sport, but I wish our (golf) season was in the fall because I would have all summer to practice.”

Wilson, who is allowed to hit from the women’s tee in matches, admits that she keeps an eye on the WIAA girls’ golf season in the fall. She competes against other high school girls in summer tournaments.

“It downpoured the entire time at state,” said Wilson, “but being there was really fun. It was a great experience It was big for us. It was the first time a whole team advanced to state.”

Wilson was the number three player on last spring’s team. She moved into the top spot this season. She takes on a leadership role when necessary, but noted that Collard is now serving as an assistant coach, so he helps out the other players. She credits head coach Budde Fifarek for improving her game.

“Budde has pretty much taught me everything I know about golf,” she said. “I got really lucky with a really good coach. He is always willing to help me and give individual instruction.”

Poor weather has made this season difficult at times, added Wilson, but she likes the direction of the team.

“We have all new players this year, but they have been doing really well,” she said. “Hopefully we will keep improving. We just haven’t had much practice time.”

Wilson initially set a personal goal of breaking 80 during the season, but due to the weather, said it’s more realistic by the end of the summer.

“Our first match it was 34 degrees, pouring rain and windy,” she said. “I try not to get down on myself. I’m pretty relaxed.”

She added that she has learned to make adjustments in her game.

“My swing changes, so I’m hitting different distances,” she said. “I’m hitting a little farther than last year. I got new clubs at the end of the summer, so I’m getting used to them.”

Wilson is a student of golf. She enjoys watching Rickie Fowler and Rory McIlroy play on the PGA Tour. She attended a PGA event at Whistling Straits in Kohler and looks forward to playing the course in the future. Wilson will miss an opportunity to play a tournament there this summer because of a trip to Florida.

Looking ahead to the remainder of the season, Wilson, who wants to be a physical therapist after college, hopes to keep improving.

“Putting is definitely not my strength,” she said. “I’m chipping well and my driver is kind of on and off.”

Now that Wilson is so passionate about the sport, does her father ever say, “I told you so?”

“He does, but that’s fine,” she said. “I play with him a little bit in the summer when he has time. He doesn’t like playing with me because I beat him most of the time.”