A lifetime of learning, teaching brings him joy

For most of his 58 years as a priest and teacher, Fr. McBride has been involved in religious education. He obtained a doctorate in this field from The Catholic University of America and founded the Department of Religious Education at the National Catholic Educational Association in Washington, D.C. 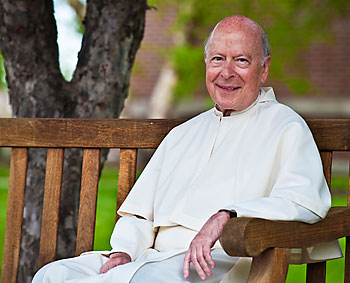 Norbertine Fr. Alfred McBride pictured on the St. Norbert College campus in De Pere. For most of his 58 years as a priest and teacher, Fr. McBride has been involved in religious education. (Sam Lucero | The Compass)

Fr. McBride, 82, is the author of more than 40 books as well as hundreds of other writings on topics ranging from church history, the lives of the saints, the interpretation of the Gospels, the Catechism of the Catholic Church, how to pray like Jesus and the saints, a short history of the Mass and six volumes of homilies. He is known for taking a complicated topic and making it easy to understand and enjoyable to read.

His recent publications include “A Priest Forever,” called a “gem of a book” by Jesuit Fr. James Martin, and his most recent book, “Staying Faithful Today,” which speaks to the topic of fidelity.

Fr. McBride has also hosted programs on EWTN (Eternal Word Television Network), on subjects dealing with the mysteries of the Book of Revelation, the life and teachings of Pope John XXIII and the teachings of the church regarding Mary.

And as a professor for nine years at Blessed John XXIII National Seminary in Weston, Mass., he taught preaching to late-vocation seminarians. Fr. McBride subsequently wrote the book “How to Make Homilies Better, Briefer, Bolder.”

Locally, Fr. McBride celebrates Mass and preaches on Relevant Radio, 1050 AM, live each Wednesday at 11:30 a.m. In his younger years as a priest he was well-known as a “radio priest” on the local Norbertine-owned radio station.

‘Touched the souls of thousands’

“The award exemplifies the commitment of Fr. McBride to present the beliefs of the Catholic faith in a language that can be understood by the adults whose responsibility it is to pass on the faith they received at baptism,” said Leland Nagel, executive director of the National Conference for Catechetical Leadership. “His writings, especially the popular ‘Teen Catechism,’ also minister to adolescents who desperately seek the truth.”

“We have always valued Fr. McBride’s contributions to religious education and are delighted he is receiving this much deserved award,” said Norbertine Fr. James Herring, prior of St. Norbert Abbey. “Through his faith and writings he has touched the souls of thousands of people throughout this country and beyond. His work and recognition bring honor to all of us.”

For Fr. McBride, the honor has been being a Norbertine priest.

Born in 1928 in Philadelphia, he was the child of Irish immigrants who died at an early age. He lived with his maternal grandmother in the Irish hub of Philadelphia. “I was raised by a village,” he said as he reminisced fondly about the Rittenhouse Square neighborhood he called home.

As a youngster it was one word that would change his life’s course: that word was “sagacity.”

It means “wisdom,” Fr. McBride told The Compass as he chatted at St. Joseph Priory, where he lives on the St. Norbert College campus in De Pere. “Sagacity” was the word he misspelled during the spelling bee that could have led him to a full scholarship to the nearby Jesuit high school. Instead, he only won a half-scholarship and because all of his friends were going to the Norbertine Southeast Catholic High School, that is where young Al chose to attend as well.

He was a teen during World War II, and with Philadelphia in such close proximity to the Atlantic there was always a concern of enemy submarines or aircraft attacking the coast. So he did his patriotic duty serving as an assistant air raid warden, making sure windows were dark and lights were extinguished during drills.

He also worked for a naval officer, Captain William Smith, during World War II. The officer was a graduate of the U.S. Naval Academy at Annapolis and worked in Naval Intelligence during the war. Fr. McBride would do everything from walk his dog after school to babysit his grandchildren. And in the summer of 1945 he lived with the Smith family in a historic home in Annapolis.

“My secret desire was to go to (the Naval Academy in) Annapolis,” he said.

At his home parish of St. Patrick’s, he selected and stocked the religious pamphlets in the stands at the back of the church. He remembers having a keen eye for what would sell — perhaps a precursor to his life’s work. He also served as an altar boy and played organ as a youngster at his parish.

In 1946, with high school graduation soon upon him and plans for college ahead, the principal called Fr. McBride into his office. “What did I do?” he remembered thinking. “I’ve never been called into the principal’s office.” It was an invitation.

“‘Alfred, I think you should be a priest,'” Fr. McBride remembers the principal saying.

It was something he really hadn’t thought much about. But others saw it, Fr. McBride said.

He headed home to talk it over with his grandmother and an uncle. “They were very supportive,” he said.

And so in the summer of 1946 young Al McBride and seven other young men went to the Philadelphia train station, destined for De Pere, Wis. It was Norbertine Fr. Robert Cornell who came to bless each of them as they made their way into the future.

Fr. McBride was ordained in 1953. At St. Norbert College he earned degrees in philosophy and English. “That’s when I got a taste for literature and what writing is all about,” he said.

Another invitation would come to him in the midst of the Second Vatican Council. The abbot general had come to visit from Europe and it was his suggestion that Fr. McBride go for advanced training.

In the autumn of 1962, he entered the Lumen Vitae International Institute for Catechetics and Pastoral Formation in Brussels, Belgium. The nine-month program included courses in Scripture, liturgy, catechesis, psychology, anthropology and field trips to sample successful programs in religious education. The majority of the 150 students were from Latin America, Africa and Asia. Canada, Europe and the United States had seven students each. In the first month all the lecturers were experts from the Second Vatican Council.

Soon after that he was asked by a publisher to consider rewriting a religious education series. Excited, he brought with him notes he had made on catechesis. But as the discussion continued, he realized that the original priest author simply wouldn’t be happy with how he would change the text.

And so his opportunity to become a published author seemed to come to an end — until another invitation came.

As Fr. McBride walked down the hall to leave the publisher’s office, a man leaned out of a doorway and said, “Hey Father, do you have any homilies?”

“Yes,” he responded. Fr. McBride had been doing radio Masses for the Norbertine owned radio station in Green Bay and had 40 already written. He wrote 12 more and the 52 homilies were accepted for publication. “Homilies for the New Liturgy” would sell 15,000 copies and his next book, “Catechetics: A Theology of Proclamation,” sold 25,000. “That was used for years,” he said.

All this would lead him to an invitation to become a visiting professor at Catholic University in Washington, D.C., and, later, studies on his doctorate. In 1971 he was appointed founding director of the Department of Religious Education with the National Catholic Educational Association, a post he held until 1979.

‘My whole life has been catechetics’

Through all the years as an author and as an educator Fr. McBride has invited people to grow in their faith and in their relationship with God. “My whole life has been catechetics,” he said. He currently serves on the advisory boards for three publishing houses, and looks forward to many writing projects in the future.

Though Fr. McBride still jokes he could have become a Jesuit if it weren’t for the misspelling of “sagacity,” he credits a Jesuit writer friend who taught him a lot about writing with just a few words of advice. Keep it simple, stay Scripture based and tell stories that people will relate to.

The vitality of his life at 82 means still walking three to four miles each day. He always has with him his rosary and often carries it visibly as an example to others. In his rooms at St. Joseph Priory he writes with inspiring views of the Fox River to one side and the St. Norbert campus on the other.

“I have had a terrific life,” said Fr. McBride. And with so many years having passed from those days as a teenager holding three jobs to his active life today as an older adult, the stories he tells of his life are peppered with the names and stories of those who shaped his life as a priest and catechist. His motto is simple: “I never let go of a friend.”