Kraig Binversie, School Hill Athletic Club secretary, said Bishop Ricken’s presence at the dedication was meaningful because of the long history the club shares with the diocese. Salvatorian Fr. Reginald Schrimpf founded the School Hill Men’s Club in 1970 while he was serving as pastor at Holy Trinity. 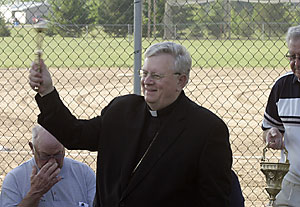 Membership began with four men and one team in 1970. Today the club has more than 30 members and fields 13 teams serving boys and girls ages 5 to 18. The teams compete in the Manitowoc County Youth Sports League.

The club faced some uncertainty in the late 1990s. Holy Trinity was slated to be merged with other parishes. Club members feared that they would lose the athletic complex if the church closed. Club members and representatives of Holy Trinity Parish met with Bishop Robert Banks to ensure that the complex remained in the hands of the club. A written agreement stated that, if Holy Trinity Church closed, the School Hill Athletic Club could purchase the sports complex for $1.

Holy Trinity Church remains open and the parish is served from St. Gregory Parish, St. Nazianz. Binversie praised diocesan cooperation for the building of new concessions and bathrooms. The club received approval to build on parish property through Tammy Basten, diocesan director of Facilities and Properties.

Annual fund-raisers support the club’s efforts, including operating expenses, property upkeep and expansion projects. Each year, the club hosts a softball and volleyball tournament, has a pizza sale and raises funds through concessions sold during games. An annual fan appreciation day at the end of the season includes an auction featuring items donated by club members and sponsors from the community. The complex and the sports program would not be possible without the commitment of club members and volunteers, said Glenn Neils, president of the School Hill Athletic Club, in a press release.

“On behalf of the School Hill Athletic Club, I would like to thank everyone for the continued support of the new sports complex,” he said. “I would like to give a special thank you to the several volunteers and athletic club members that have sacrificed time away from their families during the past few months to work on the construction of the new sports facility. This nature of leadership and commitment to the future of our society will always be a foundation for our community.”