“There has been no greater and more consistent success in Catholic communications in the United States than through the use of print,” said Bishop Zubik, who served as bishop of Green Bay from 2003 to 2007. 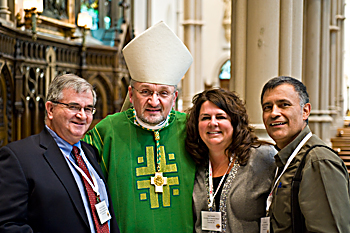 He cited figures from the Catholic Press Association’s official directory, which showed that Catholic newspapers and magazines in the United States and Canada reach almost 13 million households.

“That is an extraordinary number and that is still going on today,” said Bishop Zubik. “We can and we must use every means of social communications available to us today: television, radio, Twitter, Facebook, Skype and whatever has evolved since you and I began our meeting this morning. But I believe that it is incumbent on us as bishops and on us as church to maintain a vital Catholic print presence.”

His remarks were greeted with applause.

Bishop Zubik noted that he could not predict whether the printed word would still have the same impact in 20 years, but today, “absolutely and fundamentally the best option … to evangelize the evangelizers, is through Catholic print.”

The cost of publishing a newspaper remains an obstacle for diocesan publications, Bishop Zubik said. He offered several helpful suggestions.

“First of all, the key is circulation,” said Bishop Zubik. “Bishops … need to know the content of their newspaper. But they also must know how the newspaper operates financially.”

A large circulation helps generate advertising, he said, “and the advertising revenue pays the bills.”

“Ideally, newspapers can exist without subsidies through circulation and advertising revenues, but this can only be done through the parishes,” Bishop Zubik continued.

He said that his diocesan newspaper, the Pittsburgh Catholic, with a circulation of 111,250, has been operating with a parish mandate since 1972.

“The mandate is based on 40 percent of the number of households in each given parish. This has generated in turn enough advertising income that we in Pittsburgh have not had to raise our subscription rates in nearly 10 years,” Bishop Zubik said. “The higher the circulation, the more attractive (the paper is) to advertisers.”

While not all dioceses have a concentrated Catholic population like Pittsburgh, Bishop Zubik said all dioceses do have something advertisers want: a “coveted niche audience and that goes a long way for paying for the newspaper. Build circulation and that is a step well in the direction of financial stability.”

His second suggestion is that bishops/publishers use the newspaper consistently.

“It is incumbent that the bishop be able to use his diocesan newspaper as the chief means to communicate with all of the people of the diocese,” said Bishop Zubik. “For us that’s nearly 800,000 individuals. Again, I must as bishop use every social communications tool available. But people know and I know that it is through our diocesan newspaper that I reach them on a regular basis.”

Thirdly, he said the bishop/publisher “must be the most vocal supporter of the diocesan newspaper.”

“The way that we define it here — you are simply out of the loop if you are not reading the Catholic newspaper,” said Bishop Zubik. “I consider it my important responsibility to make that clear to our priests and to the faithful of the diocese.”

According to Bishop Zubik, it is critical that the diocesan newspaper be integrated into the diocesan structure.

“By this I do not mean that the newspaper has to be absorbed within the formal structure of the diocese,” he said. “Our newspaper operates as a separate corporation and I recommend strongly that its financial operations be completely distinct from diocesan operations and they are. However, management of the newspaper, specifically the general manager and/or the editor, has to be directly involved within a central administration of the diocese to be kept fully abreast on what is going on.”

Bishop Zubik’s final suggestion was for his fellow bishops to stay involved directly with the newspaper.

“I’m amazed at how many times many bishops rarely see their general manager or their editor,” he said. “I’m also amazed at how many general managers and editors at times resist even talking to the bishop. But this is precisely where collaboration is needed. To be able to sit down and talk about issues, even if there is not common agreement. … The newspaper must always know what the bishop’s mind is and what he expects and the general manager and the editor must have the regular opportunity to give her or his words to the bishop so that they have common understanding directly.”

Bishop Zubik said it is “an absolute given” that he and his brother bishops have a lot to learn about social communications.

“I need to learn … how to blog, how to Twitter, how to Facebook. That’s something that I must develop if I’m to be an effective shepherd for the church and beyond. But what I must also do is everything that I can do to make sure that we have a viable, a lively and informative Catholic press. Sisters and brothers, a Catholic newspaper today is not a luxury. It is a necessity. And to my mind, at least for the moment, it remains the best vehicle for adult faith formation that we have.”