“They were making pancakes; some were in charge of announcing the raffles,” she said. “The kids were so proud. They were walking around with their heads held high.” 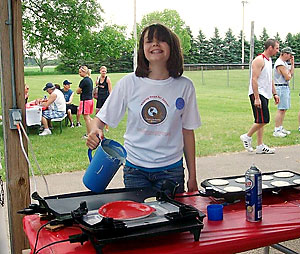 Abigail Wagenson, a sixth grader this past year at St. Rose-St. Mary School in Clintonville, makes pancakes at “Kicking Hope for Japan.” (Submitted photo | For The Compass)

The students insisted that the breakfast be part of the event, which turned out to be a good decision. Guests lined up early and the breakfast hours were extended to serve everyone. Hot dogs and hamburgers were also available at the event, which attracted 12 kickball teams, four adult squads and eight youth groups.

In addition to raising funds, the event was also designed to increase awareness. Information about the March earthquake in Japan was displayed near the registration and raffle tables.

“I think people learned more about the impact,” said Gee. “I spoke with one person who said, ‘Wow, I didn’t realize that there were prior shocks and aftershocks.’ We also had a binder full of written responses from the students for people to look through.”

Participants were generous for the causes, added Gee. Money was raised through food sales, raffles and donations. “We had people, who wanted $10 in raffle tickets, handing over $20 bills and telling us to keep the change,” she said.

Making “Kicking Hope” an annual event has been discussed. Gee said the event would be similar with a different charity benefitting from the contributions, possibly a local cause.

The students learned that they can make a difference, she added.

“I think they understand that what happens in other places does affect them,” she said, “and even at their age they can pull a community together and educate a community.”

The school’s history dates back more than 120 years, but a year ago St. Rose-St. Mary School was facing closure due to the down economy. The school community rallied to keep Catholic education in the area alive. The kickball event also helped celebrate the school moving forward said Gee.

“A lot of people have been so generous in supporting us as a school,” she said. “This outreach project was a way to give back to people in need.”