June 25 event to begin, end at Our Lady of Good Help Shrine

GREEN BAY — When you think about motorcycles, do leather jackets, growling engines and bandanas come to mind?

If Bernie Terrien and his wife, Lynn, have their way, people in northeast Wisconsin just might start connecting beads with bikes.

On Saturday, June 25, the Terriens will lead a Rosary Run to raise funds for Amigos for Christ, an ecumenical project based in Atlanta and offering aid in Nicaragua. The Rosary Run’s 60-plus mile trek will start and end at the Shrine of Our Lady of Good Help at Champion. There will be three other prayer stops along the way. 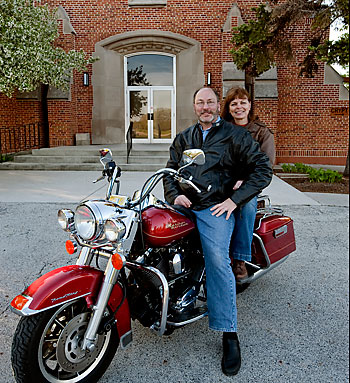 Bernie and Lynn Terrien, members of St. Bernard Parish in Green Bay, are pictured on Bernie’s Harley Davidson motorcycle outside the Shrine of Our Lady of Good Help in Champion. The Terriens are organizing a 60-mile “Rosary Run” for motorcycle riders that will make five stops for recitation of the rosary. (Sam Lucero | The Compass)

The Terriens, members of St. Bernard Parish in Green Bay, learned about Amigos for Christ when they went on a mission trip with the group to Chinanadega, Nicaragua, with Lynn’s adult daughter last October. Even before that experience, the couple had been looking for a way to combine their faith experience with their love of motorcycles.

But the idea didn’t quite gel into action

The mission trip in October changed that. It was the couples’ first mission trip. Chinandega is an area of Nicaragua hard hit by Hurricane Mitch in 1998. It was hot and Bernie threw his back out the second day. But when they got on the plane to come home, they looked at each other “and we both had tears in our eyes,” Bernie said. They knew they had to go again. They plan to return to Nicaragua in August, when their skills as teachers can be put to use in classrooms. The Terriens both teach science at Southwest High School in Green Bay.

Lynn said it was the children of Chinandega who stole their hearts.

“When you arrive on the bus,” she said, “the children in the village come out and you’re like a rock star. They are so excited to see you because they know you are going to play with them. All they want is your time. They don’t want things. … Not that they didn’t have families, they just cherished us spending time with them.”

Connecting with the children of Chinandega gave the Terriens’ dream of a motorcycle prayer experience new momentum and a purpose. The entry fee for each bike in the Rosary Run will be $15, with the funds going to Amigos for Christ. Bernie said his research revealed that the group, founded by John Bland, a former Catholic youth minister, has very low administrative costs: 97 to 98 cents of every dollar received go directly for services.

The rosary part of the ride comes naturally to the Terriens. Bernie is a member of the lay Dominicans and his Holy Rosary Chapter meets at the Milwaukee convent of the Dominican Sisters of the Perpetual Rosary. As a couple, the Terriens also pray the rosary every Monday “specifically for the poor. So it’s part of our lives,” said Bernie.

But after their mission trip, they started adding the people of Chinandega as the special focus of their Monday prayer. Still, as Bernie started promoting the Rosary Run, he wondered what the Dominican sisters would think. In mid-May, he approached Mother Miriam Leonard with his plan. Would she be offended? After listening to his idea, Mother Miriam excused herself and Bernie waited nervously.

“Ten minutes later,” he said, “she sends me a big lunch bag packed with 62 blessed rosaries.”

Those rosaries are for the riders on June 25.

The Rosary Run starts at Champion with an 8 .m. Mass, proceeds to St. Mary Church in Algoma, then to Corpus Christi Church in Sturgeon Bay, St. Francis Xavier Church in Brussels and wraps up back at Champion. At each stop, a decade of the rosary will be prayed. The Terriens plan to make sandwiches for the lunch stop at Corpus Christi, so they are asking people to register ahead of time to get a count. But people can sign up on June 25 as well.

How will a Rosary Run go over? The Terriens got an idea when they presented their plan at their parish Masses on May 14 and 15.

“The first group … was at the Saturday 4:30 Mass and it was a very elderly group,” Lynn said. “The Medi-van had pulled up several times and a lot of people came in with walkers. We looked at each other and said, ‘What are we thinking? This is about a motorcycle run.'”

But they found a ready response and “had the most generous donations” of the weekend from that Saturday evening group of seniors, “with people just handing us money for the event.”

They have found similar openness at the other parishes where the Rosary Run will stop.

“All of the churches we contacted were very receptive to the idea,” Lynn said. “We checked with them (realizing that) it’s a Saturday, with weddings and events going on and how you just don’t want to come rolling up (with the engines).”

At Corpus Christi Parish in Sturgeon Bay, members even asked if they can come to take pictures June 25.

The Terriens hope lots of people will come out at each stop to join riders in praying the rosary. However, you do need a motorcycle to take part in the ride itself. As Bernie said, “This is a prayer experience that involves motorcycles.”

“I’m hoping,” he added, “to see a bunch of faith-filled people with big smiles on their faces, who are like myself. A ragtag bunch of people who have an appreciation of the Blessed Mother and who don’t have a lot of opportunities to express it in ways they are comfortable with.”

A rosary motorcycle rally is just what Bernie — who has applied for entrance into the diocese’s diaconate program — hopes might reach out to Catholics who are a bit non-traditional, but still deeply devoted, to their faith.