Around that same time, another couple from the area, Steve and the late Mary Zimmerman, heard a priest at their church speak on World Mission Sunday and made the decision to take the concept of stewardship one step further. “They both had (doctorate degrees) in agriculture and some of the mission sites were doing agricultural projects so they decided to take a vacation from their jobs and go over to Africa and work at these projects to assist these missionaries,” said Brian. “When they were in Africa they met the young priest we were supporting. When they got back they said we should try and do something together. That was the genesis of Living Waters.” 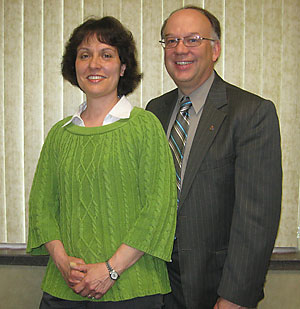 Brian and Karen Prunty (Amanda Lauer | For The Compass)

The Living Waters International foundation was incorporated in 1996. “The intent of the organization was to solicit money from the United States to help these missionary fathers. Because these priests came from a Third World country, it’s not like they had a lot of support from their home parishes.”

The missionaries focused on four main countries in East Africa — Tanzania, Uganda, Kenya and Mozambique. According to Brian, these men went into each country, did assessments and started building primary schools. From there they went on to build secondary schools, clinics, a vocational training college, chapels, churches, and now they’re starting a university. A portion of the money raised by Living Waters helps to support a Catholic radio broadcast in Africa.

From day one, Steve has been in charge of writing grants. Currently he is president of the group, Karen is secretary and Brian is treasurer. Karen is in charge of matching orphaned or destitute students to donors. It runs $25 a month or $300 a year to sponsor a student in primary school but the fees almost double when they enter secondary school. If someone can no longer sponsor their student or can’t come up with the additional fees as the student gets older, Living Waters will use money from an undesignated fund to make sure the children are taken care of.

Living Waters now supports a dozen different religious orders in Africa. The majority of their funds are generated through grants but various parishes in the Green Bay Diocese raise money for their cause as well. “St. James’ (Cooperstown) 10th grade class has held a Mother’s Day bake and craft sale every year since 2004,” said Karen. “Our home parish of Ss. Mary and Hyacinth’s middle and high school students host a meatless spaghetti supper on Ash Wednesday to support Living Waters and Fr. Mike Seis’ Dominican mission.”

A brat and bake sale, held in Wrightstown at the grocery store operated by her family for four generations, is organized by her mom and dad, Dick and Bonnie Vanden Wymelenberg. “Quite a few parishioners from St. Clare’s Parish of Wrightstown volunteer to help,” she said.

While Brian and Karen donate their fair share of money to Living Waters, their biggest donation is time. “We have been really, really blessed. Karen has been able to be a stay-at-home mom for our five children. Karen’s career is Living Waters. She works on it on a daily basis,” said Brian.

It’s been a lot of work, they said, but worthwhile.

“The gratifying part is you get these letters from students and they are so thankful, so full of gratitude for the help that is coming from their sponsors,” said Karen. “We’ve seen them become a productive part of society and I know their families will be that much better because of that.”