“I got kicked around by my brothers in a good way, and then I learned a certain amount of refinement and sensitivity perhaps from my sisters,” he said. “It was good preparation. I will probably preach about this in my first homily. Not a day goes by where I don’t meet somebody who reminds me of one of my brothers or sisters or someone in my family.” 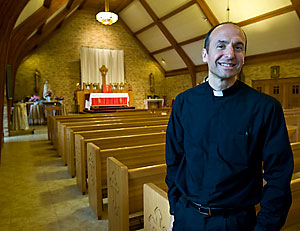 Deacon Luke Ferris is pictured inside St. Joseph Chapel on the diocesan grounds in Allouez. Deacon Ferris will be ordained to the priesthood by Bishop David Ricken on June 25. (Sam Lucero | For The Compass)

Fr. Tom Mayefske, former pastor in Coleman, first asked Deacon Ferris about a vocation to the priesthood when he was in high school.

“He was good about it,” said Deacon Ferris. “It wasn’t an insistent ‘you really need to do this’ type of thing, but ‘have you ever thought about this?’ I appreciated that kind of approach.”

Fr. Mayefske, who is retired and now lives in New Mexico, will be attending the ordination Mass where he will vest Deacon Ferris.

Following high school, Deacon Ferris enrolled at Marquette University in Milwaukee where he earned degrees in political science and Spanish literature. He also earned a master’s degree in government from the University of Notre Dame. His faith grew through involvement in campus ministry, he said.

The Chicago area was the next destination on his journey. He spent nearly 20 years as a teacher and administrator at Northridge Preparatory School in Niles, Ill. Deacon Ferris said that he has no regrets.

“I started at the school and loved it,” he said. “I enjoyed working there and felt needed. I felt that was the place where I should be.”

He describes his decision to leave the school for the priesthood as a “bit of a mid-life transition to become more of a spiritual leader than just an educational leader.” He believes that his experience as a teacher will be beneficial as a priest.

Deacon Ferris said that he enjoys using stories to teach people where they are at in their lives.

“You’re given all this theology, now can you assimilate it and make it practical for people? Teachers I had were good that way,” he said. “How would you explain it to someone in the pew now, not the textbook explanation?”

The past year has been filled with practicum experience in preparation for the priesthood. Last summer, Deacon Ferris served at St. Joseph Parish in Wautoma.

“I really enjoyed that experience,” he said. “Wautoma has a bit of everything. There is a vibrant parish there. To be able to do Hispanic ministry as well was a good opportunity. They have a really good summer program working with some of the migrant workers as well as the year-round residents.”

In the fall, he returned to St. Meinrad Seminary in southern Indiana. In addition to his studies, he served as a deacon at Ss. Peter and Paul Parish in Haubstadt, Ind.

“That was a lot of fun,” he said. “Three parishes from three small towns were combined to form Ss. Peter and Paul. The priest there, Fr. Tony Ernst, was very enjoyable. We got along really well.”

Deacon Ferris assisted with the religious education and RCIA programs and preached at Mass once a month.

“You had three sites to visit, so you had to learn and adapt,” he said. “Each place is different in a good way. It has its own atmosphere. Fr. Tony was really good at knowing that and working with the people. I learned a lot from him. He is coming up for the ordination, which is really a gift on his part.”

“He went over everything from learning how to get along with the staff to taking care of the budget,” said Deacon Ferris. “He had us make our own financial budget and talked about insurance, spiritual direction, prayer life. That was really helpful.”

Deacon Ferris said that he enjoys preaching, but working with people one-on-one is what he is most drawn to as a priest.

“I feel like I am especially called to working with people who are sick or near death,” he said. “There is a special grace there, where I can feel God really close. I used to run away from that and give trite answers like ‘Oh, you will be better’ or ‘Don’t worry, God will take care of things.’ I’ve realized that’s not where people are and it doesn’t really help. That’s me talking and wishing that everything is OK. If I can just stay with people, especially in times of difficult suffering, there’s a grace that comes and a union you have with that other person.”

In his free time, Deacon Ferris enjoys hiking, walking and photography, especially landscapes. His first Mass as a priest will be at 6 p.m. on Saturday, June 25, at St. Anne Church, Coleman site. Bishop David Ricken intends to appoint Deacon Ferris to serve as associate pastor at St. Raphael the Archangel Parish, Oshkosh.