Rome is a long distance from Deacon Brunner’s hometown of Manitowoc. He attended Valders High School and participated in cross country and swimming. His parents, Bill and Rosemary, own Poplar Farms Sales and Service in Manitowoc and that is where Deacon Brunner spent much of his time. 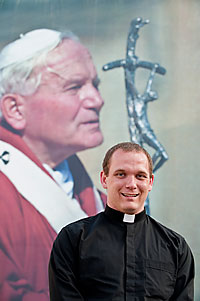 Deacon William Brunner is pictured in St. Peter’s Square, where a large portrait of Pope John Paul II was displayed during the week of his beatification. (Sam Lucero | The Compass)

The youngest of four children (sister Ranee works as an engineer in Tulsa, Okla., sister Carrie is an insurance agent in Whitelaw and brother Patrick helps run his father’s business), Deacon Brunner said his calling to the priesthood came in “two distinct stages: childhood and college.”

“From my childhood, I would guess around second and third grade, I have vague memories of thinking or perhaps intuiting that I would be a priest some day,” he said. This “seed” remained dormant for years.

“God works in hidden ways, and so I do not consider the years between childhood and college ‘lost,'” he added. After graduating from Valders High School in 2002, Deacon Brunner attended St. Norbert College, where he again felt a calling.

“There I met a few other men who were considering life with the Norbertines, and also a number of the Norbertine priests who live there,” he said. Deacon Brunner explained that college years are a time for young adults to “stand up and decide courageously” whether to deepen or abandon their faith.

He found himself being drawn into his faith. “This prompting was certainly a gift from the Lord,” he said, and he was faced with finding a way to respond. “That question is the question of vocation, and that is where the calling took on flesh.”

Among the experiences that drew Deacon Brunner closer to God were prayer and liturgy.

“During college, I had to admit that I did not really know how to pray,” he said. “I was fortunate to have Mass available — and also a community of Norbertines that prays morning and evening prayer each day at the college. These two points became my school of prayer.”

He was also drawn to silent prayer with the Scriptures and the sacrament of reconciliation.

“I often include other prayers, especially the rosary and Divine Mercy chaplet, but on the busy days there must always be time for the Liturgy of the Hours and silent prayer with the Word of God,” added Deacon Brunner.

After graduating from St. Norbert College in 2006 with a bachelor of arts degree in philosophy, Deacon Brunner was accepted as a seminarian for the Diocese of Green Bay and enrolled at Mundelein Seminary, Mundelein, Ill. In 2007, Bishop David Zubik assigned him to study in Rome.

He was ordained to the transitional diaconate at St. Peter’s Basilica last December.

In addition to forming his spiritual life, Deacon Brunner said he enjoys traveling. “I hope to share this with others through pilgrimages,” he said. “If there is space at the rectory, I would like to take up vegetable gardening again.”

Deacon Brunner said he looks forward to parish ministry. “The priest never knows who or what will walk through the doors of the parish office, or where he will be called to minster, and this is where I feel drawn,” he said. “If the opportunity presents itself, I think I would also enjoy working in educational ministry.”

His greatest desire, he said, is to “draw people closer to Christ … through preaching and celebrating the sacraments.”