Fr. De Groot is one of seven sons of Raymond and Josephine De Groot. 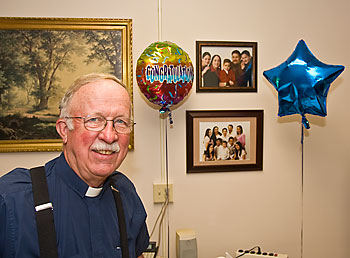 Norbertine Fr. Ken De Groot is pictured June 10 at his office at St. Willebrord Church in Green Bay. Fr. De Groot is retiring as pastor of the downtown parish on June 30, after serving there for 31 years. He said he plans to relax for a few months, do some gardening and fishing, then look into what he’s going to do next. (Rick Evans | For The Compass)

At an early age, the family moved from De Pere to St. Patrick Parish in Green Bay, then to Annunication Parish and later Bay Settlement, where he graduated from Holy Cross School.

But before that, at age 11, he contracted polio and for two years was bedridden. Each day he was taken to Howe School, where he laid on his back and wrote on a chalkboard above him.

Eventually he was fitted with a brace he wore until senior year in high school. Despite that, he played tennis and pitched baseball — another player ran the bases. Because of post-polio syndrome he can no longer climb stairs.

After graduating from Central Catholic he entered the Norbertines and St. Norbert College.

After three years of theology at the abbey he was ordained a simplex priest, allowing him during his fourth year of theology to offer Mass, and with the bishop’s permission, to preach and hear confessions in parishes at Easter and Christmas.

He also began teaching math at Abbot Pennings High School and served as athletic director, freshman football and basketball coach and book store manager. By 1978 he wanted a new challenge.

“I was in my middle 40s by then,” Fr. De Groot said. “I loved teaching, but I didn’t have quite as much patience as I did when I was younger and I thought maybe it would be good if I went into parish life, into an environment that wasn’t just kids all the time, although I loved kids and teaching.”

After two years as pastor at St. Louis Parish, Dyckesville, and its mission at Duvall, he wanted another challenge.

When he arrived at St. Willebrord on June 25, 1980, the four Norbertines living there celebrated one vigil Mass and nine Sunday Masses, plus four daily Masses Monday through Saturday — all in English.

Today, he’s the only priest living at the parish and there are two vigil Masses and six Sunday Masses, split evenly between English and Spanish (about 70 percent attend Spanish Mass), and daily Masses at 7:15 a.m. and 12:05 p.m., with confessions before each, except Saturday when there’s only the early Mass.

Plus, every Saturday afternoon from May through October there are two quinceaños (a Mexican tradition celebrating a young woman’s 15th birthday) or wedding Masses and an occasional morning funeral, Fr. De Groot said.

The demographic change was gradual, Fr. De Groot said, and was in keeping with its role of community service as a downtown parish.

Around 1990, the Green Bay Hispanic community needed a permanent home.

Fr. De Groot asked Norbertine Fr. Harvey Toonen, who offered Mass in Spanish each week for 15-20 people, about the possibility of coming to St. Willebrord.

“Our Anglo population was decreasing slightly and a lot of the structures — apartments and things — were being torn down. He said he thought it would be a good idea, so I spent one whole year talking with the various parish groups about having the Hispanics come to St. Willebrord. After a year there seemed to be consensus and agreement, so the parish council and I invited the Hispanic community to come and make this their home.”

In August they celebrated Mass in Spanish for the feast of the Assumption and in December, Our Lady of Guadalupe.

Fr. De Groot quickly discovered that Hispanic ministry was more than Mass in Spanish. There were also baptisms, weddings, counseling and sacramental preparation.

So he enrolled in a Spanish immersion program in Guadalajara, Mexico. He stayed with a family and for four weeks everything he heard and saw in school, at home and on the city streets was in Spanish.

“The hardest thing was that I wasn’t in control of my life,” Fr. De Groot said. “I had to depend on everybody else for everything.”

Over the next couple years he took two more immersion courses.

He points with pride to the 650 people enrolled in faith formation this last year at the parish, including an RCIA program popular with both Hispanics and Anglos.

He believes the Hispanic community will challenge church leaders to adopt a people-centered, rather than a program-centered, approach to ministry.

“They certainly are a pleasure to work with,” he said. “There are difficulties, of course, and there certainly are needs, especially financial and material needs, but they have a deep faith and that is something they are going to contribute to the white, Catholic population.”