“I had no idea what she was using them for,” said Goeser. “I assumed it was just for the end of the season all-conference nominations. I didn’t know that there was such a thing (all-star games).” 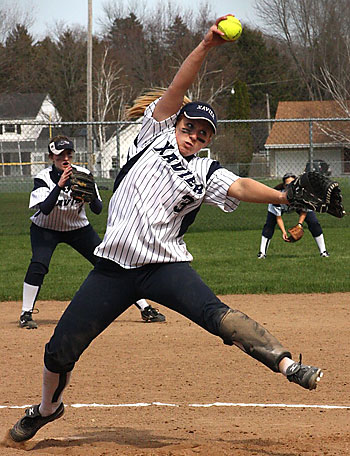 Goeser led the Eastern Valley Conference in hitting this past season with a .526 batting average. She posted an on-base percentage of .585, recorded 37 hits, drove in 15 runs and stole eight bases, all from the leadoff spot.

Not only did she lead Xavier at the plate, but Goeser was also the team’s starting pitcher for the fourth consecutive season. This spring, she pitched 115 innings, struck out 102 batters and finished with an earned run average of 2.43. Goeser also threw a no-hitter as a senior after throwing three as a junior.

Goeser said that she enjoys the responsibility that goes with being in the pitching circle.

“I like pitching because you don’t have to think as much,” she said. “You’re constantly in motion. Other positions, you’re waiting for the ball. Pitching is a lot of pressure. There is a lot on your shoulders, but I like it. It’s more of a mental challenge than a physical challenge. Once you’ve mastered that, you’ve mastered the game. I still have a long way to go.”

Stepping in as the varsity pitcher as a high school freshman was challenging, she added, but Goeser grew from the experience.

“It’s tough to be a leader on the mound when you are younger than everyone else, but I’ve always had very supportive teammates and my coaches helped me,” she said.

Xavier athletic teams call on one member to serve as a faith leader. Goeser took on that role as a senior. The softball team attended Friday morning Mass in the school chapel every other week. The girls also gathered for a prayer/cheer prior to each game. Outreach by the squad included assisting at a low-income daycare facility during the spring trip to Florida.

“I think it brings the team a lot closer,” said Goeser.

Her volunteerism extends beyond the team. Goeser recorded more than 200 hours of service during high school. For example, the summer after her sophomore year, she traveled to New Orleans where she worked at homeless shelters and did yardwork for people in need.

Goeser will attend UW-La Crosse in the fall. She is considering studying occupational therapy and plans to play softball for the Eagles.

College softball was not in Goeser’s plans when she first stepped on the diamond. She played T-ball and baseball before switching to softball in the second grade.

“She always said, ‘I don’t want to play in the girls’ league because I can’t make it to the pros if I play against the girls,’” said her father, Dave Goeser, with a laugh.

Kristin developed her game through the Kaukauna Recreation Department program and tournament teams from Kaukauna and Xavier. She also played for Sacred Heart School where her younger sister, Madeline, was a teammate and Dave served as the coach. Her father coached traveling teams throughout the years and assisted at Xavier.

“A lot of parent/daughter coaching relationships don’t work very well,” said Kristin. “I like having my dad as a coach. I respect his opinion. We debate a lot, never on the field. At home, we discuss the game afterwards — lineups, positions, strategy. We love doing that.”

“She would get in trouble staying up too late talking about the game,” said Dave.

In addition to her father, Kristin points to England and Denny Lauer, her youth coach, for helping her become the player she is today. She is also thankful for her many supporters, including Fr. Ken Frozena.

“Growing up, he was the pastor at Sacred Heart and would do the Masses at the school,” she said. “He still comes to some of my games to watch. It’s a pretty cool thing.”

Kristin played volleyball through her junior year at Xavier and ran cross country last fall, but softball has always been her favorite sport. She is playing with a Kaukauna team this summer after representing Wisconsin Elite in 2010. The all-star games raise money for the LeRoy Butler Foundation, which supports breast cancer patients. Kristin collected donations for the charity. She didn’t know what to expect prior to the all-star event, but was looking forward to the opportunity.

“I don’t know if I’m pitching or not,” she said. “I will play wherever they need me, whatever is best for the team. I just want to play ball.”

Kristin Goeser played for Team White in one of the Division 2 all-star games on June 21 in Stevens Point. She pitched six innings with six strikeouts and had a hit in two at-bats. Team White fell 3-2 to Team Black.