“If you come down too dramatically on the soccer, this formula doesn’t work,” said Antonio Soave, camp director. “It’s not an attractive formula if it’s just lower level training and you keep them for three to four hours to do spiritual stuff. You have to raise the bar on both and that’s what we’ve done.” 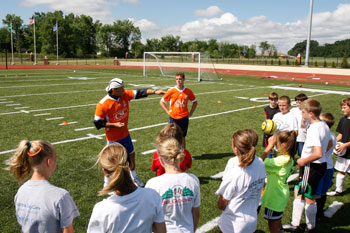 The on-the-field instruction at Donald J. Schneider Stadium featured top coaches, including Soave, a former high school All-American from Michigan who trained in Italy and played and coached professionally in the U.S. He was joined by Italian pro-level coaches and former pro players, Massimo Carli and Luigi “Gigi” Dusatti.

“They have been friends of mine for about four years, at the time when we started this,” said Soave. “They had a desire to come to the States to do a little soccer missionary work.

“Italy is certainly among the top soccer countries in the world,” he added. “Exposure to different styles of play makes you a more rounded player. The Italians have a style; the Brazilians have their own style. In today’s world it’s getting a little closer together, but there is still a unique tactical approach to the game. We have great athletic ability in this country, but sometimes what’s missing is exposure to high level tactical drills.”

The faith component of the camp included daily Mass with Fr. Baraniak at Old St. Joseph Church on campus and confessions. Thomas Wurtz, founder of Varsity Catholic, a division of Fellowship of Catholic University Students, served on the coaching staff and assisted with spiritual activities. Wurtz gave daily presentations on how to integrate faith into sports.

“We do so much to get the body and the mind up to speed, the psychological and physical elements of sports, but very little is done in the spiritual side,” said Soave. “It’s certainly a package deal. You have to look after and minister to all three. The spiritual is the most important. That’s why you see emptiness in pro athletes. That’s why they end up going off and doing crazy things.”

Soave and Fr. Baraniak, chaplain for the Green Bay Packers, serve together on the board of directors for Catholic Athletes for Christ, an organization which builds a network of Catholic athletes, coaches and staff.

“Fr. Jim is fantastic, he is a great homilist and has a phenomenal connection with the kids,” said Soave. “This is a great blessing for us. St. Norbert College is an ideal environment with outstanding facilities. We would like to come back for many successive years.”

“This is a highlight of the summer,” said Fr. Baraniak, who also provided spiritual direction for the coaches. “We allotted an hour for confessions and it ended up being two hours. For kids that young, it was a very reverent moment, a very blessed moment. These kids came here for a soccer camp and they’ve been given such a decent, beautiful, holistic dose of Catholic spirituality. I didn’t have to tell them how to engage in the rite. It was a very solemn celebration. It’s been a wonderful, wonderful event.”

In 2008, Soave presented a soccer clinic in De Pere in conjunction with a Power of Life conference. Tina Pallini, respect life consultant for the Green Bay Diocese and founder of Power of Life, was instrumental in bringing Catholic Soccer Camp to St. Norbert. Soave also pointed to John Cavil from Relevant Radio for his support. The beneficiaries are the young people.

Katie Miller, 14, a member of Ss. Peter and Paul Parish, Green Bay, said she would definitely return if a camp is offered next summer.

“It’s really awesome. The coaches here are great and I met a lot of new people,” she said. “They showed us a lot of drills they do with their teams.”

Miller, who plays for FC (Football Club) Green Bay, added that she appreciated daily Mass and the faith talks, including a presentation by Wurtz on overcoming fear.

Soave hopes that the young people take what they learned at camp into their daily lives. Perseverance is one of the many lessons, he said.

“It’s difficult to get back up once you’ve been knocked down,” said Soave. “It’s difficult when you’re up against the odds. That’s what I think sports and faith together teach you. They create that very real link. The satisfaction from the camps is enormous. You don’t just see the growth in the kids, but you see the growth in the coaches as well.”

For more information on Catholic Soccer Camps, visit http://catholic soccercamps.com. The coaches are presenting a camp in December at an orphanage in Haiti through its “Catholic Soccer Missions” effort. Donations of soccer balls, shin guards and clothing are needed. Donation information is available on the website.