When Loderbauer got his license, he was looking for a way to establish his business. It turned out to be a challenge because he was a first-generation auctioneer, unlike most of the other auctioneers he knew. 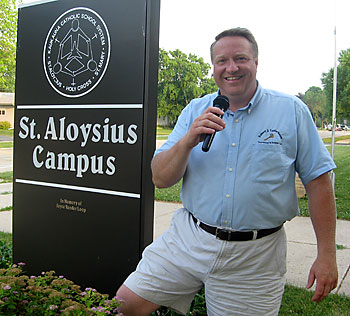 Bob Loderbauer, pictured with a microphone outside St. Aloysius Church in Kaukauna, has served as a volunteer auctioneer at local parishes since the mid-1990s. (Amanda Lauer | For The Compass)

A seasoned auctioneer gave Loderbauer a piece of prudent advice. “You need to get your face and your reputation out in the open. The best way is to do charity auctions so that people see you and if you do a good job, you help out the charities and they can see you’re involved in the community, you’re involved with charitable work,” recalled Loderbauer.

That’s exactly what he did.

“The first auction I did was at St. Bernard Parish in Appleton. They didn’t give us a dime. They bought us a couple of burgers and sodas after. It was a blast, I enjoyed it,” he said.

Later that year Loderbauer did the St. Aloysius Parish in Kaukauna auction at their church picnic and he’s been doing that one ever since. It’s always the second weekend in August and this year it will be held Aug. 14.

“At St. Al’s what we auction is donated goods from parishioners,” he said. “The people that run the auction, as far as soliciting donations and storing it, typically are pretty good about being selective and the people who donate are usually pretty good about (donating quality items). It’s mainly household items. A lot of times the Country Store, towards the end of the weekend, if they have a lot of stuff left will box up boxes and we’ll sell boxes of books, records, toys, you name it.”

Loderbauer has been the auctioneer at his home parish’s picnic since around 1996.

“We’ve done that every year,” he said, “Pretty much me and my wife are in charge of that now. We’re the ones who weed out all the donations. I’ve done St. Paul’s (now St. Clare) in Wrightstown, I’ve also helped them with their spring fund-raising auction. St. Gabriel’s in Neenah, we did that auction probably five or six years. I have a Lutheran church in Luxemburg, they called me nine years ago and asked if we would do the auction for them and we said yes. They’re to a point now where they raise on the auction probably close to $15,000.”

At the oral auctions for parishes, Loderbauer has raised as much as $40,000 in one sitting.

While still holding down a full-time job, Loderbauer runs Robert J. Loderbauer Auctioneer & Estates LLC. But all of the work he does for churches and charities (such as Junior Achievement or Boys Scouts) is done gratis. His wife still assists him and their three teenage children also help out.

When an organization or church calls and asks him to do a charity auction if he can work it into his schedule, Loderbauer will definitely do it.

“Being an auctioneer is something that I enjoy immensely,” he said. “It’s for a good cause, they’re willing to bid and they have fun. You get to meet so many people. It’s always a positive thing.