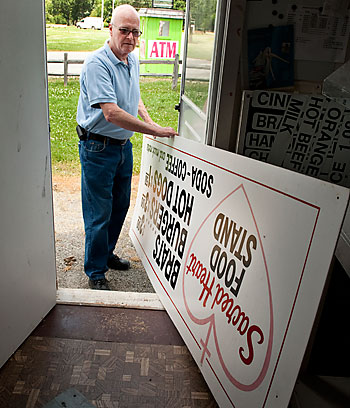 Heintz says the booth sells cinnamon buns with coffee in the mornings and various sandwiches the rest of the day. About 12,000 to 13,000 sandwiches are grilled fresh and sold during the fly-in week, including 4,500 bratwursts, 3,500 hamburgers, 3,000 hot dogs, 1,100 chili-dogs and 500 hot beef sandwiches.

“A lot of people who camp out there come over by us because they know we have the good cinnamon rolls from Schoenberger’s,” Heintz says. Schoenberger’s Pastry Shops is a longtime parish supporter.

Heintz says the food booth started about 1989 and parish volunteers built the food stand that still is in use. The first location was on the road off Knapp Street near Sacred Heart Cemetery. Then the EAA asked the parish to move their food booth near the bus stop outside the main entrance of the convention grounds.

“We’re about 500 feet from the bus stop, and it’s just great,” Heintz says. “The sales that we have are because of that. A lot of the people stay at the dorms (on the University of Wisconsin-Oshkosh campus). People get off the bus and walk past us. Everything is volunteer work, so we can keep our prices down” from those of commercial vendors on the grounds.

Heintz knows the value of sticking with something good. He went all the way through grade school at St. Vincent Parish, married his wife, Dorothy, at St. Mary Church and has been a member of Sacred Heart/St. Jude since.

“We celebrated our 50th anniversary last year,” he says. “Something went right. A lot of people don’t hang on anymore.”

But Heintz does. He’s always helped out at the parish. He used to help set up and run the parish picnic and help set up craft shows before his EAA food booth involvement. When the food booth started, he helped out for a year. But the effort then closed down for lack of a chairman. Heintz stepped in.

“Every year, we learned a little more what to do, and whatever worked for us we wrote down,” he says. “Volunteers can have a lot of fun. They get to meet a lot of interesting new people from all over the world. The EAA people are very good people. You converse with them and find out what they want. It’s a family-type event, and we built the stand around that. When we started, we said, ‘We’re going to do this to have fun, not just to make the money. Everybody’s going to have a good time, and we’ll make a few bucks for the parish.”

He says visitors love the food booth for the good food, lower prices and the mission that it serves.

“We get to talk to people and a lot of people are very interested in the fact that it is parish-run,” he says. “It is one of the reasons they come there. They ask about Mass schedules and everything else, and we draw them a map to the church. It’s a very spiritual thing.”

There even are a few visitors who volunteer to help at the booth while they’re in town.

“They are committed to what we’re trying to do,” Heintz says.