Compass sponsors pilgrimage to Ireland in 2012

Fr. McElroy was born in Dublin, where he attended school and earned a bachelor’s and master’s degrees from University College. He came to the United States in 1996 and joined the Norbertine religious order in De Pere. He served at St. Willebrord Parish in Green Bay and after his ordination was assigned to St. Philip the Apostle Parish in Green Bay. Today he serves as sacramental minister at Holy Trinity Parish in Casco.

As spiritual director of the pilgrimage to Ireland, Fr. McElroy will celebrate daily Mass for the pilgrims. 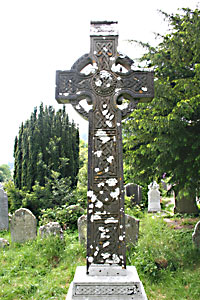 Celtic cross in Glendalough in County Wicklow, Ireland. (Wayne Stanz | For The Compass)

Donlon-Stanz was born in a village in the Wicklow Mountains of Ireland. After receiving a bachelor’s degree in religious science and history and a master’s degree in religion from Mater Dei Institute of Education in Dublin, she came to the United States in 2001 to pursue a career in ministry. She began serving in the Green Bay Diocese in 2007. In addition, she is an adjunct faculty member of Silver Lake College of the Holy Family in Manitowoc.

The pilgrimage to Ireland will depart to Dublin on Friday, June 15. Upon arrival June 16, the group will check in at their hotel for dinner and prepare for a full day’s attendance at the Eucharistic Congress on June 17.

The group will depart Dublin on June 18 and proceed to Glendalough, home of the monastery established by St. Kevin in the sixth century. Mass will be celebrated at the monastery, with time reserved for exploring the ruins where St. Kevin lived. Pilgrims will also visit Duiske Cistercian Abbey before returning to their hotel for dinner.

On June 19, the group will visit the Dominican church known as the “Black Abbey.” From there they will see the Rock of Cashel, a medieval complex called the “Acropolis of Ancient Ireland.” Next is a tour of the Blarney Castle, a popular tourist stop where visitors come to kiss the renowned blarney stone. The group will then check in to their hotel in Killarney for dinner.

On June 20, the group begins the day with Mass at St. Mary’s Cathedral in Killarney, followed by a brief stop in the Killarney National Park. They will then travel the “Ring of Kerry,” a 100-mile panoramic drive around the island’s southwestern tip.

Following Mass at the Franciscan friary June 21, pilgrims will proceed to Bunratty Folk Park to visit the Bunratty castle, which was built in 1425 and restored in 1954. The folk park is situated on 26 acres and features a recreated village street, farmhouses, a watermill and other 19th century treasures. After touring the village, the group visits Cliffs of Moher, which rests 700 feet above sea level. The cliffs boast one of the most magnificent views of Ireland. Crossing the Burren, a lunar-like area of petrified limestone, the group then arrives in Galway to check into their hotel for dinner.

On June 22, the pilgrims will attend Mass at the Galway Cathedral of Our Lady Assumed into Heaven. They will proceed to Kylemore Abbey to visit the gothic castle on the shores of Kylemore Lough. A tour of Connemara, along the western region of Galway, follows, along with a visit to the Moycullen Marble Factory and the city of Clifden, a town situated on the Owenglin River.

The group departs for Knock on June 23, home a famous shrine where the Blessed Mother, St. Joseph and St. John the Evangelist appeared in 1879. Next is a visit to Cong, site of a 12th century Augustinian abbey. Here the group will celebrate Mass and then depart for Sligo, known for its spectacular countryside. Pilgrims will have dinner here and spend the night.

Pilgrims travel to County Mayo on June 24 and spend time at Croagh Patrick, Ireland’s holy mountain. Here St. Patrick spent 40 days of Lent in 441 A.D. A stop at Ballintubber Abbey, founded in 1216, follows. Mass will be celebrated at the abbey church. The group then returns to their hotel for dinner.

On the final day of pilgrimage, the group will depart Castlebar and head to the monastery in Clonmacnoise, founded by St. Ciaran in 545-548. The group will visit Athlone, a town on the River Shannon, then to Newgrange. Later the group journeys to Drogheda to visit St. Peter’s and view relics of St. Oliver Plunkett, who was martyred in 1681. The group returns to Dublin to for a farewell dinner and overnight stay.

On June 26 the group departs from Dublin back to the United States.

Cost of the pilgrimage to Ireland is $2,999 until March 7, 2012. A deposit of $500 must be made to reserve the price. After March 7 the cost is $3,099 per person. Pilgrims will depart from Chicago’s O’Hare International Airport. An optional roundtrip coach departing from Green Bay is available for an additional $50.

For more information or to reserve a spot on the pilgrimage to Ireland, contact Amy Kawula, (920)272-8212; [email protected]