Eric DeMeuse, 20, of St. Francis Xavier Cathedral and Hillsdale College, was among the majority who were affected most by the final two days of the celebration consisting of an overnight vigil and morning Mass at Cuatro Vientros. Neither the afternoon heat nor an evening storm deterred anyone from the camaraderie and enthusiasm built up through the days leading to that event. 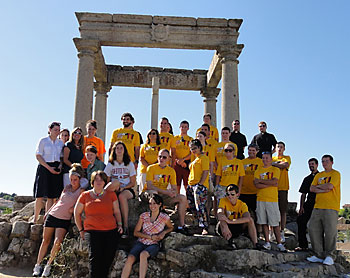 Green Bay pilgrims pose with a group from the Diocese of Superior outside the walls of Avila, Spain. (Jennifer Lee | For The Compass)

“Saturday night adoration was so beautiful,” DeMeuse noted. “To be there with 1.5 million people and the Holy Father, all silent before the presence of Christ in the Eucharist, is something I will never forget.”

Kyle Sladek, 20, of St. Elizabeth Ann Seton Parish, Green Bay, and the University of Notre Dame, noted, “Praying with the pope and millions of fellow Catholics enhanced my idea of the church’s ‘catholicism’ and inspired me to grow in faith.”

Pilgrim Philip Kuenzi, 19, of St. Francis of Assisi Parish in Manitowoc, was most impressed by the active participation and leadership of priests, not only in the Green Bay group, but in other groups as well. “This experience exemplifies the call to vocations,” he said, “by showing young men what the priesthood calls people to and how the calling is part of the greater church community.”

Tom Holschuh, 20, a seminarian for the diocese, felt a similar impression at the opening Mass at Plaza de Cibeles.

“This is incredible,” he remarked. “And it’s so symbolic. The way the priests are going out and literally bringing Christ to all the people.”

Not everything went as planned, and dense crowds and steady 100-degree heat made the group’s ventures challenging. Yet in the difficulties, graces and virtues were present.

“I was surprised at how many people’s hearts were set to see the pope. I learned to become very patient,” said Travis Seidler, 20, of St. Mary Parish in Greenville.

DeMeuse added, “The trip was a pilgrimage in the truest sense of the word. It was physically and spiritually trying, but the Holy Spirit was definitely at work, pressing us onward to a deeper relationship with Christ.”

At a homily during Mass celebrated in a conference room at the group’s hotel, Fr. Joel Sember made a parallel with the World Youth Day tradition among pilgrims to greet each other on the subway or elsewhere, trading small tokens from their homelands with each other. He challenged the group likewise to accept the invitation from Christ to trade their pains, their struggles and their weaknesses, for the life that he offers to them. It is this personal encounter with Christ and his church that changes the lives of World Youth Day participants, he said.

Beyond each individual encounter, the pilgrims went beyond themselves by writing letters of appreciation for those people who supported them, whether that was through prayer, action, or financial contribution. Cody Van Roy, 19, of Holy Spirit Parish in Darboy, said, “Most people remember their own experiences, but we really need to think about those who made it all possible.”