He upped his volunteer work once his days of full-time employment were behind him. “When I retired I made it a point to do this twice a week. I am able to bring to the people the Blessed Sacrament. That’s the important thing. When they talk about stewardship of service, that’s what that means to me,” added Dombrowski. 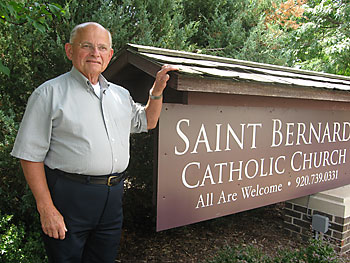 While most people don’t seem to realize everything Jesus has done for them, the people Dombrowski meets in the nursing home do. “A lot of times when I’m in nursing homes, people will say to me, ‘I don’t know what I’m doing here, I’d like to die.’ And I say, ‘Listen, our dear Lord has put you here for something. As far as I’m concerned your job now is to pray for everybody else and offer up all this suffering that you’re going through for the people.'”

For many years Dombrowski has served as an acolyte for St. Bernard Parish. “It’s what we would call a Mass server,” he noted. “When I was working, I would come to Mass and serve on almost a daily basis. We used to have a 5:15 Mass here so I would get out of work and come here and serve. When we had nuns here they took care of the servers. They did the scheduling, the training. … I started doing that about 1979.”

As much as Dombrowski loved to serve at Mass and train new servers, he only performs the acolyte duties now if needed because of his back. He had back surgery a year ago that was like a miracle for him. He no longer needed to use a walker but still has some balance issues. “I don’t serve if I really don’t have to because I don’t like staggering around the sanctuary,” he said. “But my wife and I still try to make it to Mass every day.”

He helps train the servers and schedules them for funeral Masses. “We must have about six or seven guys that are retired that will do that.”

Another duty Dombrowski picked up through the years was leading prayer services on Saturday mornings at St. Bernard. They were recently discontinued but he is on the sub list to lead the prayer service on Monday mornings.

What keeps him going? “Maybe because of the things I’ve went through physically, when I see people in the nursing homes or at home, they don’t have the ability to get out,” Dombrowski said. “More than likely they don’t go to Mass; they can’t. I figure the most that I can do is take them the Blessed Sacrament if they want it. That’s what keeps me going. There are people that depend on me — they know I’m going to come.”