However, the very qualities that make Wisconsin a farming mecca also make it attractive for suburban development. 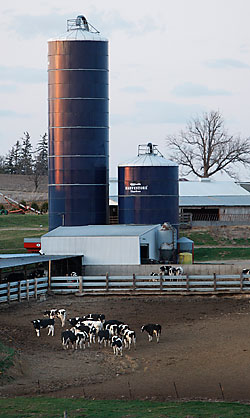 Cows graze near a silo in 2009 on a farm at sunset just outside Postville, Iowa. Protecting Wisconsin farmland is the goal of Wisconsin Working Lands Initiative. (CNS photo | Bob Roller)

Many areas in the state are close to cities and jobs, the land is flat and easy to build on, and the seasons are enticing to those wishing to shelve the grind of city life. But for farming families like Doug and Mary Behnke, who operate a third-generation dairy farm in Waupaca County, they are deeply concerned about entrusting their land as a permanent legacy to their three grown daughters.

“We currently milk 250 cows and grow 800 acres of alfalfa, corn and soybeans to feed to our animals,” said Mary, a member of St. Mary Parish in Bear Creek. “Additionally, we raise our own heifers for a total of 500 animals on the farm. It is our goal to produce high quality, nutritious and wholesome milk for cheese production. All three of our daughters have remained in agriculture with hopes that one will take over the family farm after college.” The family also employs three full-time and three part-time workers.

When Doug, who serves as the Town of Bear Creek chairman, and other community members were involved in the Comprehensive Land Use Planning Program, also known as Smart Growth, a few years ago, they learned about the importance of preserving farm land while allowing future residential development in designated areas.

Together the township worked with the Wisconsin Working Lands Initiative, a statewide plan to retain as much agricultural land as possible.

The Working Lands Initiative established a new program to provide 50 percent of the cost of purchasing agricultural conservation easements, including transaction costs. Through the Purchase of Agricultural Conservation Easements (PACE) program, the state was to provide funding to cooperating local governments or non-profit organizations to purchase easements from willing landowners. Land with an agricultural conservation easement cannot be developed for any purpose that would prevent its use for agriculture.

As one of the 16 farms in the state chosen for the PACE program, the Behnke’s were excited to know that their farmland would never be developed or utilized for any other purpose other than farm land. However, in trying to balance the state budget, Gov. Scott Walker’s plan called for eliminating PACE and the bonding authority to fund those first 16 projects.

With an already downward spiral of family-owned Wisconsin dairy farms, legislators from both parties were outraged and voted 16-0 in May to keep PACE on the state statutes and to honor the state’s commitment to the 16 PACE projects approved during the first-ever statewide selection process. The $5.2 million funding will come from the state’s Knowles-Nelson Stewardship Fund.

“Keeping the PACE program in the budget was a testament to how vital the $59 billion agricultural industry is to Wisconsin,” said Behnke. “It shows that lawmakers understand the impact agriculture has on rural communities and the jobs the industry creates. …. Keeping farmland in production will be a fundamental component of the future of agriculture in Wisconsin for generations to come.”

The Legislature’s Joint Committee on Finance modified the governor’s plan and will permit farmers to sell the development rights on their farms and agree to keep the property in agricultural use for perpetuity. The compromise plan calls for a yearlong PACE study to consider how to strengthen the program. Beyond the first 16 applicants, there is no money in the budget for future PACE purchases, but the program is still on the books, according to William Berry of American Farmland Trust/Protecting Wisconsin’s Farm and Forest Lands.

“Just a few years ago, we were losing up to 30,000 acres of farmland a year in Wisconsin,” he said. “In that regard, we were one of the top states in the nation for farmland loss. That acre of farmland is actually the loss of much more. Talk to any farmer and they will tell you their ability to do their jobs is hindered by rural residential development. A house here and another one there on five-acre plots spell trouble for farmers who suddenly encounter complaints about noise and odors and other realities associated with farming.”

The Legislature did concede to the governor’s plan to eliminate conversion fees when land is rezoned out of farmland preservation zoning districts for development.

“These fees were intended to discourage the conversion of farmland to other uses,” explained Berry. “Realtors and developers opposed the conversion fees.”

The other components of the 2009 Working Lands Initiative remained, and includes requirements for counties to update their farmland preservation plans and grant funding to make it happen.

“This is important, because local people are asked to identify their priority farming areas, which then can be protected through local zoning and other tools,” said Berry. “When plans are updated, farmers who choose to can receive enhanced farmland preservation tax credits.”

However, losing any of the requested state backing to protect Wisconsin farmland supports an overall downward trend of the American Dairy business, according to Thomas Nelson, coordinator of the Rural Life Office of Catholic Charities in the Diocese of Madison.

“Back in 1960 there were 95,000 dairy farms in Wisconsin, and today, we have just 12,000,” he said. “We are rapidly consolidating, and big farms are eating up the small dairy farms,” he said. “Then we have these big 4,000-head dairy farms that are upsetting small community politics and causing a number of environmental issues.”

While exact numbers of Catholic farmers in the state are unknown, Nelson admitted that it is far less than it was just a year ago. Historically, Catholics comprised a large percentage of the overall farming community.

“Now we have farmers taking multiple roles, such as farming and in other businesses to make ends meet,” he said. “I am hoping that people will take back the power from the states and the federal government. In fact, the Holy Father just wrote a wonderful article on the family farms for the Vatican Information Service in July for the United Nations’ Committee on Agriculture’s 37th annual conference.”

In Pope Benedict XVI’s July 1 letter, he stressed the importance of family-owned farms, encouraging their growth to rebuild and to re-grow a healthy food system that would go a long way towards eliminating poverty, underdevelopment and hunger in the world.

The pope also addressed food security as an authentically human requirement and it should be guaranteed for present and future generations. He encouraged solidarity as essential among all political and strategic actions and called upon international institutions to support work that strengthens human dignity, especially among the world’s children.

According to American Farmland Trust’s Berry, while PACE was not completely eliminated by recent state budget cuts, most in the farming community are disappointed that conversion fees were eliminated.

“The purpose was to strengthen farmland preservation,” he said. “Without the fees, it’s sort of like another government giveaway program.”

However, the effort to save key components of the Working Lands Initiative were interesting and encouraging to Berry, who attended numerous public hearings with members of all political parties.

“It showed deep commitment to and high interest in farmland protection in Wisconsin,” he said. “All of our legislators were united about the need to protect the best of our farmland. Agriculture has a $59 billion-a-year economic impact on Wisconsin. Preserving farmland and helping farms stay viable supports rural communities, schools, churches, businesses and all the other pieces of the pie.”

Keeping PACE in the state budget was very important to Town of Windsor resident Vern Treinen, a third generation farmer, whose land was selected as the first PACE farm in the state.

Farming on his own since 1978, Treinen, a member of St. Olaf Parish in DeForest, grew up working the land and raising Holsteins with his father, and now his father helps him with caring for the cattle and planting crops. While not an easy life, it is one he enjoys and has allowed him to provide for his wife Vicki and two daughters.

All in the family

While he could easily have cashed in on millions to sell his land to developers, Treinen insists that there are more important things than money.

“How much money is enough? Some things have no price tags,” he said. “We have enough money. We work hard, but we live pretty comfortable and now I will rest a lot easier someday when the dirt is kicked on me, that this land will never be developed.”

Treinen’s roots grow deep, and his principles were planted into his soul as a young boy when he promised his grandfather that the farmland would remain as it was intended.

“When people asked me why I wanted to preserve this land, I told them that when I bought this farm from my dad, who bought it from my grandfather, that I would always keep this as farmland,” he explained. “Now I know this will be forever. I can rest more comfortably and I know my grandfather is resting comfortably too. It was kind of neat, when the PACE funding went through, I got all kind of congratulations from other farmers—they treated me like I saved the world, because I protected my farmland.”

Doug and Mary Behnke also feel that serving the earth in farming means much more than the money they could earn by selling their cherished farmland.

“Being a farmer is more than a profession, it is a lifestyle,” said Mary. “We are proud to take care of the land with the same passion for farming our fathers instilled in us. Maintaining the fields of corn, pastures of cows, and a rural community of farmers means more to us than the dollar value of commercial development. We have been blessed with fertile soils and want to keep it in production.”

According to Jim Ennis, director of the National Catholic Rural Life Conference in Des Moines, Iowa, the effort to save the key parts of the PACE program is good for the entire state and provides an option for willing farmers to sell their land through the PACE program, rather than succumb to developmental pressure.

“If this program had been eliminated, then the 16 projects representing nearly 5,800 acres would not be dedicated to agricultural production in perpetuity and farmers would have fewer options,” he said. “Rural communities could lose out if more and more farmers have to sell their land to developers and/or speculators.”

The church affirms farmers and all those involved in agricultural and food production, added Ennis.

“The church views agricultural workers in high esteem,” said Ennis. “The vocation to farm is a high and noble calling and the church strongly supports family farms and the need to keep the farmers on the land, growing food for communities and for the world.”