“We truly are blessed by the Franciscan presence,” noted Bishop Ricken. He offered a brief history of St. Francis’ life and how the 13th century saint was “completely changed and transformed” by God. 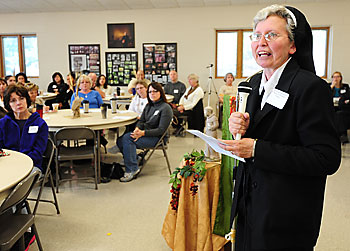 Sr. Louise Hembrecht, community director of the Franciscan Sisters of Christian Charity in Manitowoc, gives a presentation on the life of St. Francis of Assisi to diocesan employees Sept. 15 during a staff retreat at St. Mary Church in De Pere. (Sam Lucero | The Compass)

After Mass, Fr. Dan Felton, diocesan vicar general and pastor of St. Francis of Assisi Parish in Manitowoc, gave diocesan employees an update on the implemention of Bishop Ricken’s pastoral letter, “Parishes: Called to be Holy, Fully Engaged, Fully Alive.” He noted that implementation of the pastoral letter is under way at parishes around the diocese.

“When we look at Francis and Franciscan spirituality, we’re really looking at Christ,” she said. “One of my teachers used to say, ‘When gazing at the moon, don’t focus on the finger that points to the moon. Jesus the moon is a reflection of God the Father. Francis is only a finger that points to Jesus.’ So we really need to focus on Jesus and not so much on Francis.”

Francis was born in tumultous times, not unlike today, said Sr. Louise. “There were problems with celibacy and poverty. There were various heresies. … Francis comes along and he doesn’t really combat the heresies directly. What Francis does is, he is caught up in the love of the creator.”

“Francis, realizing that the Lord is the rock of salvation, had a reverence for rocks,” she said. “Francis had a special devotion especially to lambs. Why? Because Jesus was the lamb of God. Creation not only reflected God to Francis, but creation led to God.”

St. Francis’ spirituality of creation has continued to influence people inside and outside of the church, said Sr. Louise. “Francis was a holy man and by his life he imitated Jesus. So we ask ourselves: How do we in our lives imitate Jesus and how do we come closer to the Lord?”

Deacon Paul Umentum, a practicing attorney, also spoke about the Secular Franciscan Order, of which he is a member.

Diocesan staff members spent part of their day reflecting on ways God is revealed in nature. They also discussed ways in which they could live more simply at home and at work, how they could better serve the poor and how they could commit themselves to peacemaking.