On Sept. 18, the 180 families of the faith community at St. Stanislaus Kostka in Armstrong Creek will gather with Bishop Robert Banks for a 10:30 a.m. centennial Mass. A dinner in the local community center will follow, with the food made by parish members. 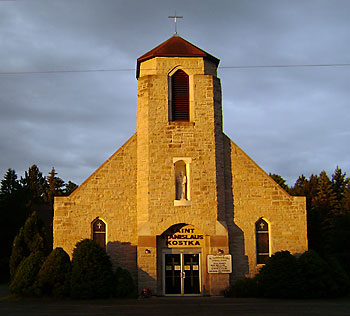 Submitted Photo | For The Compass

That’s how they do things up here,” said Deacon Jerry Cross, who has been parish director since 2009. “They don’t use caterers. (The meals, including funeral meals, baptisms and weddings) are strictly made by people making and bringing in stuff. When you think about stewardship — from that perspective — everybody steps forward.”

Carma Schumann, a member of the anniversary committee, agreed.

“That’s how we do it. And we always have so much food,” she added, explaining that people divide up the meal — salads, entrees, desserts.

Schumann and her husband, Robert, have been members of the parish for 46 years, raising their four children there. They were married at St. Joan of Arc Parish in Goodman where Carma (née Weinfurter) was raised. The two parishes are “sister parishes,” she notes.

Their history has been tied together for 100 years: Today they share Deacon Cross as parish director. When Armstrong Creek started out as parish, it was a mission of the Goodman parish, before getting its first resident pastor in the 1920s.

St. Stanislaus Kostka’s parish roots trace back to a baptism in January 1911. That was 11 years before the village was formally incorporated in 1922, after existing under a few other names, including Boneville.

A local land company in Goodman began advertising land to Polish immigrants in Chicago and on the East Coast. Many people contacted family in Poland and immigrants arrived expecting to find rich farmland. They found rocky soil on land that had clear cut forest — leaving the stumps and brush — from the lumbering industry.

That church burned down on April 2, 1943. It was so cold that the water in the fire trucks sent to battle the blaze froze. Masses had to be held in the town hall until the basement of the new church could be used in 1948. The present church was dedicated on Nov. 6, 1951, by Bishop Stanislaus Bona. The new church — built of stone — cost $24,000.

There were 45 confirmations at that dedication Mass and 45 priests at the Mass.

One of those was Fr. Thaddeus Koszarek, who served as subdeacon. Today, his brother, Msgr. Paul Koszarek, is sacramental minister for the parish. He continues the tradition of Masses in Polish, since he is of Polish heritage and grew up in Antigo at St. Hyacinth Parish, which is also of Polish heritage.

“There’s an identity between the Polish tradition and the Catholic faith,” said Msgr. Koszarek.

“(That parish) has a very strong sense of community, a family community,” he said. “And the older people, in particular, are very devoted to the church. … They have a strong faith there and I enjoy celebrating Mass with them. They are very homey. The spirit is good.”

He plans to be at the Sept. 18 event and is looking forward to the sausages at the dinner. He also expects there to be galobki (pronounced “kawumpki”), which is a type of cabbage roll.

Lifelong parish member Evie Kiszonas notes that parish members are grateful for Deacon Cross, Msgr. Koszarek and Fr. John Hephner. “They have brought the parish together after some very difficult years,” she said.

While Msgr. Koszarek celebrates the Mass in Polish at Armstrong Creek, he is not a native speaker. He learned Polish at St. Bonaventure High School in Sturtevant. However, Fr. Edward Nowakowski, who served as pastor at the parish for more than 40 years, has spoken Polish all his life. It is why the Chicago native went to Armstrong Creek in 1960.

“I was sent there because I could celebrate the Mass in Polish,” said the priest, who lives in retirement in Green Bay. “It was my first parish (as pastor).”

Fr. Nowakowski was especially fond of the features that draw many summer tourists to the area each year. “I loved being out in the country,” he said. “I grew up in Chicago, so all the lakes around (were wonderful) … I spent a lot of time swimming.”

He also spent a lot of time speaking Polish — from the Mass to celebrating the sacraments to blessing the Easter baskets, a tradition called ?wi?conka in Polish.

Fr. Nowakowski said the most outstanding thing about St. Stanislaus Kostka for him was “the atmosphere out there in the country. The people were from Poland and they retained all their customs.

“Even with the youngsters, they were willing to learn a little Polish. They tried to carry on the traditions of their parents. They were both first and second-generation Polish.”

Fr. Hephner, who is also sacramental minister for St. Stanislaus Kostka, is also impressed with the “loyalty of the Polish people — the families from Chicago who come up here and settle for their retirement years because of the Polish traditions. Some people in Armstrong Creek are from Poland and (even from) the hometown of Pope John Paul II.”

The Polish heritage of the community is seen area-wide each July, when Armstrong Creek hosts Polish Heritage Days, a 21-year tradition that includes a Polish Mass held at St. Stanislaus Kostka. While most of the Masses are no longer in Polish, the church itself has the words “Faith, Hope and Love” painted on its interior, in English and Polish: wiara, nadzieja i mi?o??.

Kiszonas remembers an August tradition in the church that she said has died out with the older parish members: a blessing of flowers in August.

“I remember being a girl,” she said, “seeing the altar and the whole Communion railing lined up with flowers that people had grown with their gardens.”

Deacon Cross sums St. Stanislaus Kostka up as “wonderful people and wonderful community. I’m so honored to be here.”

He added that he and his wife, Marianne, have been welcomed since arriving from Menasha nearly three years ago: “I’ve gone from being ‘a flatlander’ … to a ‘transplant,'” he said, noting that it is an honored “progression.”

Carma Schumann notes a sense of gratitude as the parish approaches its centennial: “We’ve been through some hard times,” she said. “We’ve pulled through it and we’re still here, and that’s great.”