Dick Holschuh recalls the inspiration he felt from his parents as a teen growing up in Green Bay to help others and follow his Catholic faith. 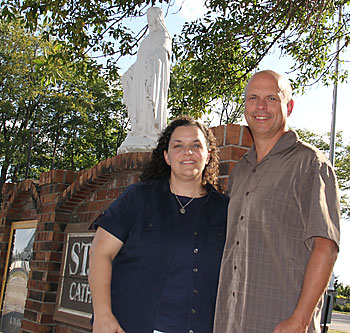 Dick and Julie Holschuh (Steve Wideman | For The Compass)

“My parents were always quick to help anyone who needed it. They didn’t ask a lot of questions. Their feeling was ‘If you need help here it is,'” Dick said.

Strong family inspiration and guidance along with a devotion to living out their Catholic faith were two primary similarities the Holschuhs of Appleton found they shared when the couple met for the first time on Aug. 12, 1986, at a Trailways bus station in Milwaukee.

Twenty-three years of marriage and six children later, the couple, who attend St. Mary of the Immaculate Conception Parish in Greenville, were recently named by the Wisconsin Knights of Columbus as the 2011 family of the year for the Diocese of Green Bay.

The Holschuhs live their faith through focused work on pro-life activities, participation in programs benefiting children with disabilities and hundreds of hours of volunteer work in the community.

The couple also work on passing on their faith to their own children.

Dick and Julie Holschuh discovered their shared family inspiration and Catholic faith when Dick was the bus station manager in Milwaukee and Julie was looking to take a bus trip.

“Dick helped me plan the trip. We talked for two hours and realized we had a fair amount in common,” Julie said.

The talk led to the couple’s first date.

“We talked about religion all during that first date. We were both at a point in life and in our faith that we knew it was important to marry someone who shared the same faith,” Dick said.

The Holschuh’s faith and commitment to family helped open an opportunity to become involved in work with children with disabilities.

Their middle son, Jimmy, now 15, was diagnosed several years ago with a learning disability.

Dick has since volunteered many hours to work with Special Olympics.

The death on Christmas Eve four years ago of one of Jimmy’s classmates, Curtis Krull, born with Down syndrome, led the couple to assist Fr. Quinn Mann — who presided over the child’s funeral — in establishing programs for Curtis Kamp, a week-long camp for families of children with special needs.

The annual mid-summer camp is held at the St. Joseph Formation Center in Baileys Harbor in Door County.

“We’ve always had a place in our heart for the (special needs) kids,” Dick said.

The Holschuhs have no plans to slow their giving of time and faith.

“We still have a long way to raise all our children,” Julie said.

In addition to home schooling three of the couple’s children, Julie continues her volunteer efforts in pro-life activities, including praying often at the abortion clinic in Grand Chute and participating in 40 Days for Life, a nationwide campaign aimed at ending abortion in America.

Dick looks to expand his participation in the Knights of Columbus, which he joined three years ago.

The clincher came when Dick found out the Knights of Columbus actively support programs assisting individuals with mental and physical disabilities.

“An organization like the Knights of Columbus is needed in this day and age as the economy gets tougher and some service groups step back,” he said.

While the Holschuhs are heading down some different paths in their commitments, one road nonetheless remains a joint highway for the couple — caring for their children.

“We plan to stay close to church groups in Greenville, but a lot of it right now is just keeping the kids close to the faith,” Dick said.