His choice of the university founded by the U.S. bishops in 1887 turned out to be a good one as Capozella excelled in the classroom and the pool as a freshman for the NCAA Division III Cardinals. 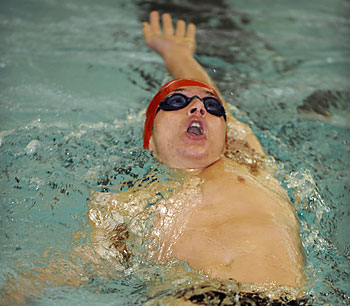 Caleb Capozella swims the backstroke at a meet for The Catholic University of America. The 2010 graduate of Notre Dame Academy in Green Bay was named the Landmark Conference rookie and swimmer of the year as a freshman. Capozella also excels academically, posting a 4.0 grade point average in biomedical engineering. (Photo courtesy of CUA | For The Compass)

Academically, Capozella, the son of David and Barbara Capozella, has a 4.0 grade point average in biomedical engineering. He is a member of the dean’s list, the Landmark Conference academic honor roll and was named a Nagel scholar (outstanding academic achievement, service and community involvement) by the school of engineering. His service included bringing leftover food from the university to the homeless.

Capozella capped off his swimming season by being named the Landmark rookie and swimmer of the year at the conference championships. He won the 200 meter backstroke with a school and conference record time of 1:53.65. He also captured the 100 meter backstroke and 200 meter individual medley championships in university record times of 52.45 seconds and 1:54.83, respectively.

“I just wanted to improve,” said Capozella. “I believe that if you’re not improving, not getting better, you’re getting worse. I wanted to get personal bests, which I did at the conference meet.”

Capozella points to a team training trip to Fort Lauderdale over Christmas break as a key to his success.

“We trained like four hours a day,” he said. “It was all focused on swimming. I feel that I got a lot better. It was really helpful because I had never done anything quite like that before.”

If Capozella builds on his first year success, he should qualify for the NCAA swimming and diving championships as a sophomore. His studies and swimming complement each other, he added.

“I’ve been swimming since age 8, so I’m used to swimming and school at the same time by now,” he said. “I think it’s pretty good for me. It helps me structure my lifestyle. If you ever talk to doctors about what to do to increase your brain power, all say exercise. Academics and athletics have gone well together for me.”

Capozella is considering medical school following his undergraduate studies. He spent much of his summer shadowing physicians in the Green Bay area and in Ohio during a trip to visit relatives.

“It’s definitely my ambition to be a doctor,” he said.

Capozella, a member of St. Agnes Parish, Green Bay, added that he was well prepared for both college classes and athletics.
“Notre Dame did a great job,” he said. “It’s definitely a college prep school.”

The Tritons do not have a swim team, so Capozella competed for the Green Bay YMCA.

“It’s a really good program,” he said. “Luke and John Bushman (former teammates) competed in the Olympic trials (sectionals). They are amazing swimmers and good friends. It was a good experience with good competition. Dave Korst is a very good coach.”

Capozella not only promotes the YMCA program, but swimming in general.

“I definitely encourage it as a sport,” he said. “Unlike basketball and some other sports, it matters less about your physical stature and more about how much effort you put in it. That’s what I love about swimming. I feel that anyone can do it if they try hard enough.”

The outlook for the Catholic University men’s swim team is promising for 2011-2012. The squad lost only two members to graduation. Capozella looks forward to getting back to work with his teammates, but once again, his studies will take precedence.
“I’m really looking forward to more classes in my major,” he said. “For me it will probably be easier. Last year, I had to take core classes like English. I don’t like writing papers. I like engineering.”