Newman Center is his second home

“It is a place where college students or anyone else can come and learn about their faith,” he said. “They have a place to relax between classes, have coffee in the morning and hang out.” 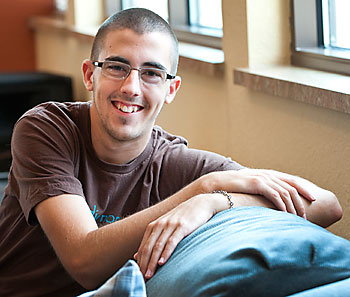 Because Wilms is an Oshkosh native and doesn’t live on campus, he said the Newman Center is like a home. “It’s somewhere on campus for me to be at peace.”

As a student worker for the Newman Center, Wilms is involved with campus outreach, planning events to bring people into the center, and being on hand whenever possible to welcome visitors and build relationships through conversation.

“It’s lending a hand whenever they need it or just talking with people. If I can see someone has a problem, I’ll go up to them, see what’s going on. I will be there in support and pray for them,” he said.

Wilms said he became a part of the Newman Center community as a way to “grow my faith. It helps keep me sane during the college day. It gave me a mission, something to look forward to, help others, build a relationship with Christ and help myself at the same time.”

Having a resource like the Newman Center is important for young students, he added.

“It shows people that faith is still important and they’re not just in college for schooling, but also to grow in faith and start being their own person.”

Wilms is a member of St. Raphael the Archangel Parish in Oshkosh, along with his parents, Bob and Peggy, and his older brother and sister, Adam and Brittany. He says they all helped influence his choices in giving back and serving his religious communities.

His parents have helped with fund-raisers and other events at St. Raphael, and his siblings were involved with the youth group there.

“It really helped me to be more humble and giving and less selfish,” Wilms said. “They could have been doing other things, but they decided to give back, instead.” Having that example to follow was a great influence for him, he said, and he followed in their footsteps when he was in high school.

“I saw how much (my siblings) enjoyed the youth group, and I wanted to do it, too. Once I got in, I wanted to give back to everyone else.”

In addition to the youth group, he has served as a sacristan, child care provider and extraordinary minister of holy Communion at St. Raphael.

“It’s made me a better person, more patient and compassionate, and a better man,” Wilms said.

Wilms believes faith has been an important compass in his life.

“It makes the faith journey and life in general easier to navigate if you have people to rely on who have the same beliefs,” he said. “It keeps you happy and positive.”

Wilms has worked hard to keep a positive focus in his life. He said he has always been the underdog in everything he tried to do, and not many people showed much faith in him. He drew strength from the Bible quote: “I can do all things in him who gives me strength.”

“My whole life, I’ve always had people telling me, ‘You can’t do that,’ ‘You’re not good enough,'” Wilms said. “I can as long as I’m not doing it alone. If I have Christ with me, I can do anything I want to do.”

And that’s the message he wants to relay to others: The importance of God’s love.

“It’s never-failing, and he loves us no matter what we do,” Wilms said. “He died for us so that we could live and be with him. Every time I’ve been to a retreat, gone to confession, received all the graces, it filled me up and made my faith and belief that much stronger. I want to continue to grow even further. Faith isn’t something you do with your parents or you do because your parents tell you to do it. It’s something you do because it’s what you believe in and that it’s important.”

Name: Michael Wilms
Parish: St. Raphael the Archangel, Oshkosh
Age: 19
Favorite saint: Francis of Assisi
Words to live by: “I can do all things in him who gives me strength.”
— Phil 4:13