“He entered the Abbey of Tongerlo in Belgium and was singled out or chosen to be their Bible professor,” explained Bolin. “He was obviously very bright. If you were going to be a Bible teacher in the seminary you had to go to Rome to get your degree, so Wambacq studied at Pontifical Biblical Institute in the late ’20s and early ’30s.” 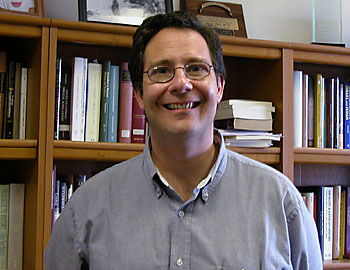 Bolin spent a week in Tongerlo searching through archives and reading notes and exam questions written by Fr. Wambacq. He also met Norbertines who were the scholar’s former students. Bolin, who spent three weeks overseas, continued his research at the Vatican Archives. Fr. Wambacq became involved in the Second Vatican Council through his work with the Pontifical Biblical Commission.

“The liturgy and the Bible were two of the biggest issues for the council,” said Bolin. “The bishops made it very clear that they did not like the draft document on the Bible. One reason they didn’t like it is the document didn’t have any type of ecumenical spirit. One of the reasons (Pope) John XXIII called the council was for the need to build bridges with our brothers and sisters in other faiths.”

The pope called for the removal of the document and asked the Pontifical Biblical Commission, of which Fr. Wambacq was the secretary (chair), to write a document on how the Gospels tell the history of Jesus. A group of international biblical scholars began working on the document, which was halted temporarily following the death of Pope John XXIII in 1963. Work on the document was renewed and it was released in 1964.

“It’s relatively unknown,” said Bolin. “What it says is the Gospels are the end product of the preaching of the apostles, ultimately, the teaching of Jesus.”

Bolin explains that the Gospels grew in three stages. The first is the teaching of Jesus.

“Jesus preached his message and he adapted it based on the ability and the culture of his audience,” said Bolin. “The apostles took some of the things that Jesus had told them and adapted it to the pastoral needs of their communities (second stage).”

The third stage is the people who wrote the Gospels. The evangelists who knew the apostles took their preaching and adapted it to the needs of their Christian communities, said Bolin.

“They rearranged the order of the material in order to make theological points,” he added. “It’s important to understand this as we read the Gospels.”

The document by Fr. Wambacq and the commission was a part of Dei Verbum. Bolin has used the work in his college classroom for several years.

“The Gospels aren’t simply ‘Who was Jesus and what did he do?'” he said. “(Rather they are) ‘This is Jesus, here’s what he did and more importantly, this is what it means.’ The Gospels are preaching documents, reflections of the church. They are theological. That doesn’t mean that they are not historical, but the theology is what is driving the teachings.”

Bolin, who began his 10th year at St. Norbert this fall, wrote two separate articles on his research. One mainly focuses on Fr. Wambacq, who died in 1986, while the other tackles the place of the Bible in Catholic theology. He has also written a book scheduled for release in November.

“One of the things that Vatican II stressed is that lay Catholics ought to be more familiar with the Bible,” said Bolin. “In the 1970s, they had biblical scholars publish commentaries in these very affordable little paperback books, ‘Collegeville Bible Commentary.’ They decided to redo the whole series.”

Bolin wrote “Ezra, Nehemiah,” accounts about the return of the Jewish exiles from Babylon during the rule of the early Persian kings.

“The angle I kind of took is that they reconstitute their identity by trying to get a grip on their past,” said Bolin. “It’s written for a Bible study so you want to give people something to think about.”

The series is being published by Liturgical Press (www.litpress.org). Bolin doesn’t expect his volume to be the top seller.

“It was interesting, but I would hope more people will read the volume on Genesis or John’s Gospel than on Ezra and Nehemiah,” he said with a laugh. “That makes more sense to me.”