An impact no one could sea

As one of three port chaplains for the Port of Green Bay, an appointment conferred on now-Msgr. Dillenburg in 1969 by the late Bishop Aloysius Wycislo, Msgr. Dillenburg — who prefers to be called Fr. Jim — always stood ready to answer the spiritual needs of sailors. 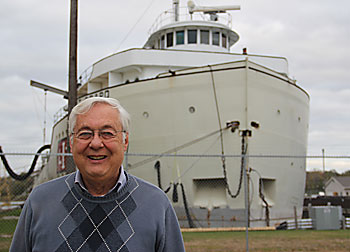 Msgr. Jim Dillenburg, retired port chaplain for the Port of Green Bay, stands in front of a cement storage ship docked at Green Bay on Oct. 18. The ship is similar to the Great Lakes freighter on which Msgr. Dillenburg met Norman Martinson 40 years ago. (Steve Wideman | For The Compass)

“I always say God picks the strangest people. I don’t know how to swim and I get seasick, so who do they pick to be port chaplain? Me,” said Msgr. Dillenburg who retired in 2010 as pastor at St. Elizabeth Ann Seton Parish in Green Bay.

Despite Msgr. Dillenburg’s issues with water, his love for the seafaring lifestyle was well known to church officials at the time of his appointment as port chaplain.

“I grew up in Casco living 10 miles from Lake Michigan. My father and I always went to watch the car ferries on Lake Michigan. That planted a seed in me,” Msgr. Dillenburg said.

The seed would bear fruit on a summer afternoon in 1971 when Norman Martinson, chief engineer on the massive Paul H. Townsend, sought out Msgr. Dillenburg during his rounds of the ship while it docked at Green Bay to dump its 7,850-ton load of dry cement.

Msgr. Dillenburg was part of a three-man, ecumenical team who ministered to sailors from around the world who found themselves away from home for months at a time.

“We were two Protestant chaplains and a Catholic priest whose purpose was to welcome sailors to Green Bay in the name of the churches of Green Bay and to let them know someone cared. It’s a ministry of presence,” Msgr. Dillenburg said.

Martinson, of Alpena, Mich., needed someone who cared at that point in his life.

For years a devout Catholic, Martinson married his wife Carol, a Protestant, whose refusal to participate in her husband’s Catholic faith led the Catholic Church not to recognize the marriage at that time. 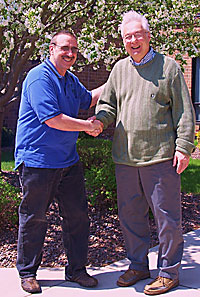 Msgr. Jim Dillenburg is pictured in May 2009 with Chris Martinson, whose father, Norm, befriended the former port chaplain in 1971 and returned to the Catholic faith. Chris Martinson also abandoned his faith while a young man and credits his father’s renewed faith for bringing him back to church. (Steve Wideman | For The Compass)

That prompted the discouraged Martinson to stray for years from his own faith.

Martinson had rejected a visit from Fr. Dillenburg two weeks before he finally called out to the Catholic priest as he passed Martinson’s cabin on the Townsend.

“So we went into his office on the ship. He closed the door and explained he really wanted to be a Catholic again, but didn’t know if anything could be done,” Msgr. Dillenburg said.

With 48 hours before the Townsend was due to leave port and with Christmas less than two months away Msgr. Dillenburg gave a quick call to the chancery office of the Green Bay Diocese, where research found a process called “sanatio in radice” that would allow validation of the marriage in the eyes of the church.

“Sanatio in radice means, in effect, ‘let’s bless what we have.’ And that’s a pretty loose translation,” Msgr. Dillenburg said. “Norm was anxious to return to the church and really wanted to receive Communion during Christmas. So we filled out the paperwork, the marriage was blessed, Norm went to confession and then went home the happiest man in the world.”

Martinson’s son, Chris, a lumber broker who lives in New London and is active in the nationwide Fellowship of Christian Lumbermen, said the meeting changed his father’s life and his as well.

“It changed my Dad’s life dramatically,” Chris said. “Prior to that meeting my Dad’s goals were worldly goals. I would describe my Dad as a believer in God, but from a distance without a personal relationship with Jesus Christ. After the meeting my Dad was on fire for the Lord. He began storing up treasures in heaven rather than on earth.”

“What Fr. Dillenburg did was what we all are called to do here on earth, which is to be a witness to the saving power of Jesus Christ. He let my father know that God wanted him back and that God still loved him,” Martinson said.

Chris, who is active in youth ministries at Shepherd of the River Lutheran Church in New London, said Msgr. Dillenburg’s work with his father eventually inspired Chris himself to return to church after a 30-year absence.

“At the time of the meeting between Fr. Dillenburg and my father I was 20 years old and in full rebellion against faith in God, but when I came to my senses in the 1980s my father’s strong faith had an impact on me,” Martinson said. “My father and I became best friends.”

Norm Martinson died of cancer in 1996.

Msgr. Dillenburg said he and Norm became “good buddies” for life and shared respect for the need for seafaring ministries.

Not long after the 1971 meeting between Norm Martinson and Fr. Dillenburg, the Green Bay priest was named as national director of Apostleship of the Sea, an apostolic work of the Catholic Church offering help and pastoral counseling to seafarers around the world.

Msgr. Dillenburg had served since 1969 as the diocesan director of AOS.

“I never met a seafarer who has been around for awhile that didn’t believe in God,” Msgr. Dillenburg said. “One good November gale and they knew they weren’t in charge of their ship. And they have a tremendous sense of God’s creative powers after watching many sunrises and sunsets.”

Shortly after Msgr. Dillenburg was named to head the national AOS program, the Vatican approved a long-sought American proposal to allow seafarers to receive the Blessed Sacrament at sea.

Martinson eventually took a land-based position as fleet engineer for National Gypsum Company, later Inland Lakes Management, and endured a significant pay cut to be closer to his family.

Martinson became a well-respected lector, usher and youth minister at St. Catherine Church in Ossineke, Mich., and was known for using Bible verses to inspire athletes on a high school cross-country team he coached. His interest in coaching runners came about after gaining a love for running while jogging around, in and through the giant ships he served on in the Great Lakes.

Msgr. Dillenburg served in Rome from 1991 to 1996 as general secretariat for the AOS. His job entailed coordinating AOS port chaplain programs around the world.

“You’d have sailors from Asia coming to Europe by way of Africa. We had world conferences to make sure the chaplains would get to know one another so they could warn each other of possible issues with sailors coming into port,” Msgr. Dillenburg said. “We were also in a position to monitor changes in the maritime world and lobby for seafarers’ rights. Seafaring is very complicated. A ship may be owned by someone in one country, operated by someone in another country and be staffed by crews from 14 different countries. Sometimes the most responsible party was the one with the least authority — the port chaplain.”

Msgr. Dillenburg left the port chaplain program in 2000 to focus on his work as pastor at St. Elizabeth Ann Seton Parish.

“I don’t know how many lives Msgr. Dillenburg touched as the port chaplain, but I know one he touched and that was my Dad. That 1971 meeting impacted a lot of other people beyond my Dad and continues to impact people today,” Martinson said.

That call for help 40 years ago from Norm Martinson will forever remain a part of Msgr. Dillenburg’s memory as port chaplain in Green Bay.

“The meeting was one of those things where you start with a seed. Norm Martinson said he wanted to be a Catholic again. You have no idea where a seed like that is going to go so you just try to be helpful and suddenly the seed grows and grows and blooms, sending out more seeds,” Msgr. Dillenburg said.

“Norm Martinson didn’t have to tell me all his secrets. I knew right away he was a good man and his crew knew he was a good man,” he added. “But here was a man who was willing to tell me his story and ask for help. What a privileged position to be in.”