The early settlers of Baileys Harbor were ministered to by missionaries in the early 1800s. Mass was celebrated in private homes. The early priests came from Peshtigo and later from Ahnapee and Sturgeon Bay. As the Catholic community grew, the visits became more frequent. In 1874, the group had grown to 20 families and Fr. John Rhode helped them build the first small white wood-frame church. 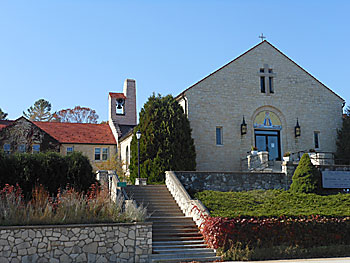 The exterior of St. Mary of the Lake Church in Baileys Harbor. Part of Stella Maris Parish, the present church was dedicated in 1936. (Submitted photo | For The Compass)

In 1886, Fr. Lawrence O’Laughlin was appointed by Bishop Frederick Katzer as the first pastor and St. Mary was no longer a mission of Algoma and Sturgeon Bay. In 1895, the first rectory was built and by 1926 the parish had grown to over 50 families and the church was expanded.

In 1935, Michael W. McArdle, a Chicago industrialist, wrote to St. Mary parishioners, advising them that he would donate a new church and rectory. McArdle was born and raised in Baileys Harbor and attended the parish as a young man. Construction of the new church began and McArdle passed away before it was dedicated on Nov. 28, 1936. Since that time stained glass windows have been added, the kitchen has been renovated and all areas redecorated.